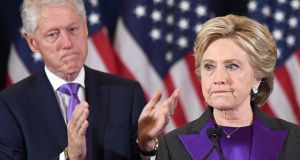 Representatives for Bill and Hillary Clinton hit back on Monday at a series of claims made by Trina Vargo in Shenanigans: The US-Ireland Relationship in Uncertain Times. Photograph: Jewel Samad/AFP/Getty Images

Bill and Hillary Clinton have dismissed allegations in a new book on the Ireland-US relationship that funding was cut for scholarship programme because of a personal vendetta against the scheme’s founder.

Representatives for the Clintons hit back on Tuesday at a series of claims made by Trina Vargo in Shenanigans: The US-Ireland Relationship in Uncertain Times.

The book claims that former secretary of state Hillary Clinton cut funding to the Mitchell Scholarship programme, a scholarship scheme that sends 12 US students each year to study in Irish universities. She argues that she was black-listed by the Clintons after she worked on Barack Obama’s presidential campaign in the run-up to the 2008 election.

Ms Vargo also alleges Bill Clinton phoned senator George Mitchell to express his displeasure at the fact that Chelsea Clinton’s boyfriend had not been shortlisted for a scholarship.

In a statement on Monday, representatives for the Clintons described the accusations as “baseless and patently false”, noting that funding for the programme was also cut under secretary of state John Kerry.

Ms Vargo, a former aide to the late senator Ted Kennedy, founded the US-Ireland Alliance in 1998. The primary function of the association is to administer the Mitchell Scholarship programme. The organisation also hosts the annual Oscar Wilde gathering in Los Angeles, which showcases the Irish film industry and fosters links between the Irish and Hollywood film communities.

As well as the claims related to the Clintons, the book offers a somewhat damning account of US-Ireland relations and efforts by successive Irish administrations to secure immigration reform.

The book argues that Irish-America is in decline, with the number of Americans who “tick the box” on the US census form for Ireland falling dramatically in recent years.

“There is no Irish vote. If there ever was such a thing, it hasn’t existed at the national level for decades,” she states, noting the “diminishing political influence” of Irish-America.

Ms Vargo is also deeply critical of the Ireland Funds, a philanthropic organisation established by Tony O’Reilly, Dan Rooney and others in 1976, noting that the fund only began contributing to the US-Ireland alliance and the Mitchell Scholarship programme in 2016. She dismisses the work of the organisation as “outdated”.

In a chapter titled “Begging Bowl” she writes: “Ireland and Northern Ireland are wealthy. Yet political leaders from both places have come to the US in search of financial assistance and favours that they should have dropped long ago. There is more to be gained by changing this approach.”

As well as criticising several well-known figures in Irish-American circles, Ms Vargo’s book also contains insights into key moments in the US involvement in the peace process.

She recounts a meeting she attended with Gerry Adams and Irish Central founder Niall O’Dowd in a bedroom in the Waldorf-Astoria hotel in New York during the height of the negotiations about granting a visa to Adams. She described Adams as “surprisingly likeable” in her briefing to Ted Kennedy after the meeting.

But at other points she is scathing of her experience dealing with Irish people. Noting the Irish characteristic of “indirectness”, she writes that, from an American perspective, “Irish people simply lie more often”.

“While each culture has its own idiosyncrasies, many of which are endearing, the unusually high level of evasiveness and outright lying has been at the heart of many of Ireland’s current problems.”

One chapter of the book focuses on the work of the Irish Film Board, which has recently been rebranded as Screen Ireland. Ms Vargo argues that many senior members of the Irish film industry as well as policymakers were slow to pursue contacts with senior figures in Hollywood, despite her efforts to introduce them. Her book outlines the key role played by Vargo and the US-Ireland alliance in encouraging Hollywood director JJ Abrams to film part of the Star Wars movies in Ireland.

The Irish Government is the main funder of the US-Ireland alliance, providing approximately €390,000 in funding each year to the Mitchell Scholarship programme. Last year, then minister for education Richard Bruton approved a three-year extension to the annual funding commitment. Ms Vargo receives an annual pay package of €161,000 which includes a base salary of €139,000.