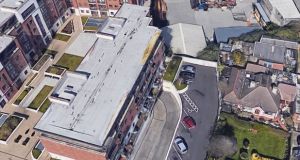 Roof damage at the Hyde Square apartments in Kilmainham, Dublin.

The State would face an “open-ended liability” that it could not meet if it took on responsibility for dealing with the costs of repairing defective homes built during the boom, the Dáil has heard.

Minister for Housing Eoghan Murphy signalled the Government is unlikely to get involved in a scheme to assist homeowners and residents of properties built during the boom who face significant costs to repair the defects.

He said it would put the taxpayer at significant risk while potentially letting off builders who were responsible for the defects.

Mr Murphy was responding to Sinn Féin leader Mary Lou McDonald who called for the Government to act on the report of the Oireachtas Housing Committee last year which recommended the establishment of a redress scheme to pay for remedial works.

Ms McDonald referred to The Irish Times investigation which highlighted four Dublin developments with serious fire-safety and structural defects which were built during the boom. She said residents and owners of these were facing massive repair costs and possible eviction as a result.

The Irish Times investigation found that apartment owners at Hyde Square in Kilmainham face costs of almost €11,000 each for their decaying roof, while owners in Marrsfield Avenue in Clongriffin are facing a bill of €826,000 to remedy fire-safety issues. In Spencer Dock in Dublin city centre residents face eviction for remedial works. In a north Dublin apartment block at Belmayne, a fire-safety inspection and survey of balconies is underway.

Ms McDonald said the Oireachtas committee report recommended that the redial scheme could be funded by an industry levy plus Government funding and “low cost loans to help owners pay for remedial works offering a real solution for people living in defective” properties.

“It is not acceptable to say solely a matter for developers and purchasers since weak regulation is an underlying cause of the problem,” she said. “The people concerned bought or rented homes in good faith, but your Government has all but ignored calls to assist them.”

Mr Murphy acknowledged the financial difficulties homeowners faced and pointed to the change in and strengthening of building regulations since 2014.

He said the Government wanted to find a solution to the problem but “it’s difficult to see one that doesn’t take on this massive open ended liability on every other taxpayer in the State that the State simply couldn’t meet”.

Meanwhile, an advocacy group for home owners, the Apartment Owners Network, has called on the Government to establish a redress scheme for people in this situation. In a statement, it said the details of the Irish Times investigation came as “no surprise”.

“Engagement from our participant base indicates that the cases identified are but the tip of the metaphorical iceberg,” the statement says.

The group referred to the pyrite remediation scheme, set up by the Government to help owners fix the strutural defects caused by pyritic heave, and asked for a similar solution to be provided for owners’ management companies affected by building defects.

“In the period 1990-2014, the State failed to provide adequate oversight of building control. In this period, however, the Exchequer derived significant tax revenue from multi-unit residential development, in the form of Vat, Stamp Duty, PAYE, and other taxes,” the group said.

“Statements detailing the improvement in building control since 2014 are not relevant in the context of the difficulties in which thousands of homeowners find themselves. The State must take responsibility for its role in a lax building control regime.”

The Irish Times reported on Tuesday that apartment owners at the Beacon South Quarter in South Dublin, which was found to have fire safety issues that will cost more than €10 million to fix, are being shut out of a €750-million Government scheme which had been billed as a potential lifeline for owners of apartments facing fire-safety defects.

The owners had hoped to apply for a loan from the Home Building Finance Ireland (HBFI) fund until they realised the prohibitive 8 per cent interest rate which the loans commanded.

Reacting to this report, Green Party TD for Dublin Rathdown Catherine Martin said the “mixed messages” coming from the Government on possible supports are “making an already difficult situation unbearable”.