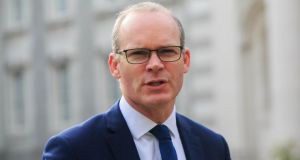 Tánaiste and Minister for Foreign Affairs and Trade, Simon Coveney speaks to the media during a press brieifing in the courtyard of Government Buildings in Dublin on Tuesday. Photograph: Gareth Chaney/Collins

EU negotiators are seeking to provide assurances to the UK that “temporary means temporary” and that the UK “won’t be trapped against their will indefinitely into the future or anything like that” the Tánaiste and Minister for Foreign Affairs Simon Coveney said yesterday as British negotiators arrived in Brussels.

Mr Coveney was speaking at Government Buildings following briefings to the Cabinet yesterday on the economic impact of Brexit and with Brexit legislation continuing its passage through the Oireachtas.

Mr Coveney struck a conciliatory tone in his remarks, stressing the desire of Ireland and the EU to help the UK government to pass a deal through the House of Commons in a crucial vote next week.

“We’re trying to find a way through here that can allow the British parliament to ratify a deal that makes sense for Ireland,” Mr Coveney said.

“We want to ensure that the backstop is only there as a temporary mechanism while a more permanent solution is put in place. We always said that,” he said.

“So I think we’re in the space of trying to provide clarification that temporary means temporary and that [British attorney general] Geoffrey Cox and others can recommend to their parliament that they won’t be trapped against their will indefinitely into the future, or anything like that,” Mr Coveney said.

He said that Ireland and the rest of the EU wanted to reassure the UK “so that they don’t have a fear of the backstop in terms of any impact that some fear might be permanent”.

Although Mr Cox and the British Brexit secretary Stephen Barclay arrived in Brussels yesterday for talks with European Union’s chief negotiator Michel Barnier, there is little expectation in Irish Government circles of an imminent breakthrough in the talks.

Instead, it is believed that if there is to be an agreement on a text for a document providing reassurances to the British or any tweaks to the backstop exit mechanism, it is unlikely to arrive before the weekend.

Mr Coveney said yesterday he expected to be working closely with Brussels “into the weekend if necessary”.

In the Dáil, the Taoiseach Leo Varadkar said that the Government had received no text of a proposed agreement or clarifications.

“The position as of today is that we have no texts or draft texts to consider or get legal advice on. I am not entirely sure what MPs are looking at in London but we have no legal texts or draft legal texts to consider, to propose amendments to, or to seek legal advice on. What happens a lot in London, as deputies will be aware, is internal negotiations,” the Taoiseach said.

Meanwhile, the Minister of State for European Affairs Helen McEntee has warned that any joint interpretative statement agreed between the EU and UK to reassure London that the backstop would only temporary could itself not be left open to different interpretations.

Mr Barnier has suggested that an “interpretative” statement could provide the British with guarantees that the Northern Ireland backstop, which has led to a deadlock on an agreement over the UK’s exit, was only designed “unless and until” an agreement was reached to maintain an open Northern Irish border in trade talks.

“What you need to be careful is that it is not interpreted in two different ways and you reach an agreement, you have a transition period and then there is a different interpretation as to what happens next if we get to a point where the backstop may need to be used or there are other concerns,” Ms McEntee told The Irish Times.

“We need to be very clear as to what’s being agreed and how it is interpreted because if there were two interpretations, then obviously that poses challenges and difficulties as well.”