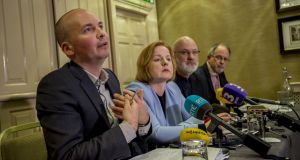 Paul Murphy, left, said: “The guiding line for us all in this debate should be what Lenin, approvingly quoting Trotsky, argued, that ‘ideological struggle within the party does not mean mutual ostracism but mutual influence’.” Photograph: Brenda Fitzsimons

The Socialist Party will present the truth “in the way which is most digestible to the working class at a particular time”, TD Paul Murphy has said.

In internal documents discussing Brexit and wider strategy, he asks: “Are we guilty of not ‘telling the truth’ to the working class when we don’t bring a demand to leave the EU?

In exchanges with members including Joe Higgins, he advocates a “united front” method of dealing with groups such as Sinn Féin.

“The guiding line for us all in this debate should be what Lenin, approvingly quoting Trotsky, argued, that ‘ideological struggle within the party does not mean mutual ostracism but mutual influence’.”

He also corrects his comrades’ “inaccurate historical description of the united front as ‘tactics the Comintern and revolutionary parties adopted . . . in the 1920s and 1930s’.”

“It was in fact central to the success of the Bolsheviks in 1917, and was fought for by Lenin in particular,” he says, citing the “struggle proposed by the Bolsheviks to stop the Kornilov coup against the Kerensky government in August 1917, using ‘Kerensky as a gun-rest to shoot Kornilov’”.