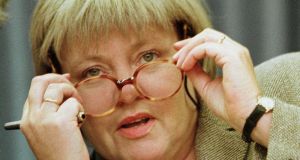 Northern Ireland secretary Mo Mowlam wanted to write an article criticising the wrongs of all parties during the Famine. Photograph: Reuters/Corbis

Northern Ireland Office (NIO) civil servants believed a magazine article by their new secretary Mo Mowlam on the 150th anniversary of the Famine could detract from the widespread praise garnered by Tony Blair’s statement of regret in June 1997.

One senior civil servant feared Mowlam would produce something “likely to be shredded by the professional historians”, according to files released in Belfast today.

The NIO had been told Mowlam wished to write an article for the Belfast magazine Fortnight praising the work carried out by the Quakers during the Famine and criticising the wrongs of all parties, including Irish landlords.

The plan met with a chorus of opposition from civil servants who thought any attempt to expand on Blair’s Famine statement would be a mistake. The British joint secretary Peter Bell expressed “a particular horror of the Secretary of State rehearsing historical cliches about ‘landlords’ (or indeed about ‘lords and ladies’ to whom she has a particular aversion)”.

In a confidential letter dated June 10th, Bell wrote “the Prime Minister has already said about as much as can safely be said by a senior British political figure on this ancient, but infinitely sensitive – and complex – subject. Of which not the least important lesson may be in how disasters in public policy can result from the highest minded of intentions. . .

The letter was written one week after Blair made a well-received expression of regret over the Famine. In the statement, read out by actor Gabriel Byrne to a commemorative concert in Co Cork, Blair described the Famine as “a defining event in the history of Ireland and of Britain” which had “left deep scars”, adding that “those who governed in London at the time failed their people through standing by while a crop failure turned into a massive human tragedy. We must not forget such a dreadful event.”

There is no record of Mowlam having published the article under discussion, but in another restricted letter Donald Lamont from the UK foreign office’s Republic of Ireland department enthuses over the prime minister’s statement on the Famine.

“I do not think I could have wished for a better response to the Prime Minister’s statement than that of the Taoiseach,” Mr Lamont writes. “The Irish Embassy have also been warm in their reaction. And if [Ulster Unionist MP] John Taylor is no more than ‘dismissive’ then no harm may have been done in that quarter. The most obvious downside would be attempts by the Irish to exaggerate the potential parallel with Bloody Sunday. The situations seem to me so different that that ought not to be too difficult to handle.”

Although Blair’s statement was well received, it did not entirely neutralise all Anglo-Irish tension over the Famine. In November 1997, the British ambassador to Dublin, Veronica Sutherland, reported an encounter with minister for foreign affairs David Andrews after he arrived late at a conference on the topic of landmines.

“He announced as he arrived that he was late because he had been speaking to the Senate about the famine,” Sutherland reported. “He said with some force that the more he learned about the Famine, the more angry it made him. I had hoped that the Prime Minister’s statement had taken the heat out of this issue. I do hope Mr Andrews is not now going to undo the good work.”

Besides the ambassador’s observation, an unnamed British official has written, “this sounds less like a reassessment of a Govt position than an excuse for lateness – I should try it myself some time”.