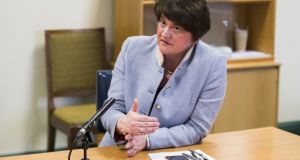 The calamitous cash for ash scheme was the scandal that brought down the Northern Executive and Assembly just over three years ago. There was a real fear that Sir Patrick Coghlin’s report into the renewable heat incentive (RHI) scheme might bring it crashing down again, just two months since it was restored.

There seems little chance of that happening now that the retired court of appeal judge has published his 656-page, 270,000-word doorstop of a report.

So who is to blame? Well, according to the report, it seems that everybody is to blame and nobody’s to blame.

Probably the politician who had most to fear from the inquiry was the DUP leader and First Minister Arlene Foster. The scheme came in under her supposed watch when she was minister at the North’s Department of Enterprise, Trade and Investment (DETI) in 2012.

The trouble was she wasn’t properly watching, a fact she herself acknowledged again on Friday when repeating her apology for her “failings” and saying that, embarrassingly, she hadn’t read the technical legislation but rather the explanatory notes.

Coghlin reprimanded her for that omission but gave her an out by finding that her officials “incorrectly” told her that RHI was value for money. He also chided that she should not have signed off on a document when it lacked the necessary costs information.

That slap on the wrist seemed hardly sufficient to justify any calls for Foster to stand down.

Coghlin gave the DUP special political advisers or spads a fair old rattle and, applying the Ladybird idiots guide to politics, advised that “Ministerial decisions should be taken by Ministers and by no one else.”

But again a surely cheerful DUP press office was able to respond quickly by quoting the report: “Corrupt or malicious activity on the part of officials, Ministers, or special advisers was not the cause of what went wrong with the NI RHI scheme.” The word “not” was in bold and underlined.

Northern Ireland civil servants too were criticised, particularly the officials in Foster’s old DETI department. Coghlin referred to the officials’ failure to spot the “perverse incentive” where the more boiler users spent, the more they earned, getting £1.60 back in subsidies for every pound they spent on boilers.

Coghlin’s bottom line was that the DETI “should never have embarked” on such a “risky”, under-sourced and misunderstood venture.

Sinn Féin suffered a little censure. That was for former Sinn Féin minister for finance Máirtín Ó Muilleoir seeking permission from senior kitchen cabinet member Ted Howell before he would sanction the imposition of cost-cutting measures on the scheme.

If the DUP hierarchy was relieved, Sinn Féin was cock-a-hoop. Deputy First Minister Michelle O’Neill, whose former agriculture department had promoted RHI when she was in charge, felt emboldened to describe the whole scandal as the “DUP’s RHI fiasco”.

Still, in terms of wider politics, there will be relief that the RHI report is unlikely to wreck the restored Executive and Assembly, even if Sinn Féin, in particular, feels there is capital to be gained at the expense of the DUP.

The security of the institutions appeared implicit when O’Neill said, “Sinn Féin is committed to the political institutions, but they must operate differently from what went before, with a new kind of politics, which is progressive, respectful, and has integrity.”

Overall there is a judicial legal restraint to Coghlin’s report. It is fair, detailed and objective, and while more may emerge as we dig deeper into the report, it doesn’t appear to reflect the public outrage at the scheme.

Coghlin characterises it, in the main, as a tragicomedy of “errors and omissions” and an “accumulation and compounding” of those mistakes.