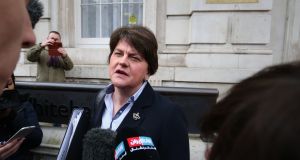 DUP leader Arlene Foster: report found she should not have been presented with a document which lacked all the necessary cost information, but she equally should not have signed it. Photograph: Jonathan Brady/PA

The Northern Ireland Renewable Heat Incentive (RHI) scheme should never have been adopted, the chairman of the inquiry into the so-called cash-for-ash scheme, Sir Patrick Coghlin has ruled in his inquiry report published on Friday afternoon.

While quite damning on how the scheme was run, Sir Patrick found no evidence of corruption although there were examples of “unacceptable” behaviour. He also was critical of First Minister Arlene Foster but allowed that she was given incorrect information by her officials about the scheme.

Three years and two months after the inquiry into the controversial scheme was ordered Sir Patrick in his detailed report found that the scheme was “novel, technically complex and potentially volatile”.

He said it was “highly risky yet the risks were not sufficiently understood by all those who should have understood them within the Northern Ireland government, either at the outset or at any time during the life of the scheme”.

The scheme was designed to encourage firms, businesses and farmers to use eco-friendly wood-burning boilers. But unlike the scheme in England and Wales there was no cap on subsidies in Northern Ireland. This meant that for every £1 users spent on green heating systems, they got £1.60 in subsidies.

It was introduced by the North’s Department of Enterprise, Trade and Investment (DETI) in 2012 when the current DUP First Minister Arlene Foster was its minister.

Close to 2,000 applicants were approved for the scheme. There was a spike of 984 applications in the three months from September to November 2015 after officials announced they were correcting the system but before that change took effect. This raised the question as to whether there was political pressure to extend the lifetime of RHI, and where that pressure came from.

Notwithstanding the failure of the scheme Sir Patrick found there was no corruption or “malicious activity” involved by Ministers, officials and special advisers.

He said, “Corrupt or malicious activity on the part of officials, Ministers or special advisers was not the cause of what went wrong with the NI RHI scheme (albeit the inquiry has identified some instances where behaviour was unacceptable).

“Rather, the vast majority of what went wrong was due to an accumulation and compounding of errors and omissions over time and a failure of attention, on the part of all involved in their differing roles, to identify the existence, significance or implications of those errors and omissions”.

In relation to the spike in applications in late 2015 he found “that the period of time that elapsed between the realisation of the problem...and the introduction of scheme amendments...was excessive and there was a lack of appropriate urgency”.

“This was particularly so in light of known risk, and later development, of a very significant spike in applications to the scheme,” he said.

He also warned that such a calamitous situation could happen again. He said, “There is no guarantee that the weaknesses shown in governance, staffing and leadership revealed by the inquiry’s investigation of the NI RHI scheme could not combine again to undermine some future initiative.”

Sir Patrick found that Ms Foster was “incorrectly” told by officials that the RHI scheme was projected to provide the highest renewable heat output at the best value.

He nonetheless was critical of Ms Foster, who previously admitted she had not read the legislation relating to the scheme. He said, “While the Minister should not have been presented with a document which lacked all the necessary cost information she equally should not have signed it in those circumstances.

“Overall, at the scheme development stage insufficient care was taken within DETI to weigh properly the whole life-costs of the NI RHI scheme against the risks posed by it and other options available.”

Overall Sir Patrick found, “While motivated by the laudable aim of encouraging the use of renewables rather than fossil fuels in heat production the Northern Ireland stand-alone scheme should never have been adopted.”

The report, which was formally launched at Parliament Buildings at 2 pm on Friday, is in three volumes with 56 chapters and 276,000 words, and containing 319 findings and 44 recommendations.

Sir Patrick said DETI “should never have embarked on such a novel and complicated demand-led scheme” and suggested it would have been better adopting the English and Welsh scheme which was capped.

“Officials in DETI failed properly to understand the damaging presence of the perverse incentive, which facilitated exploitation, throughout the period when the scheme was open to new applicants,” said in his report.

“Given the volatile and demand-led nature of the scheme, and the unusual nature of the funding, insufficient steps were taken to protect the NI RHI budget,” he added.

He found that important RHI documents within DETI, including those provided to Ministers, “were often inaccurate, incomplete or misleading in important respects”.

“Mistakes, misleading statements and omissions which arose in such documents or in submissions were often then repeated in subsequent documents and were generally not identified by the recipients of those documents,” said Sir Patrick.

He added that having embarked on the scheme “DETI did not ensure that adequate resources and expertise were applied to its development, delivery or running”.

Said Sir Patrick, “This lack of resources and people with the specialist skills to ensure that the scheme was robustly designed and monitored impaired the project from the outset and was a continuing problem. Those junior civil servants responsible for the scheme day-to-day, no matter how hard-working and well-intentioned, were consistently under-resourced.

“They were not equipped with the necessary expertise, not adequately supported, partly because of the inadequate understanding of risk presented by the scheme and also because of pressure on resources generally.”

Sir Patrick also found that the decision to use “generalist” civil servants as opposed to those with special knowledge of such schemes was a “contributory factor to the problems within” the scheme.

Sir Patrick found that the arrangement around the division of responsibility between the then DETI minister, Arlene Foster, and her special adviser was “ineffective and led to false reassurance on the part of the Minister ... as to the level of scrutiny applied.” The adviser is not named but Andrew Crawford was Ms Foster’s adviser at the time.

In regard to the Northern Ireland Civil Service, the report found that “basic administration and record-keeping ... was on too many occasions lacking within DETI”.

“Several important meetings and discussions with Ministers were not properly recorded in writing”, and guidance regarding the minuting of meetings “were routinely not followed by officials”, which contributed to “uncertainty” over what had taken place or the decisions that had been reached.

Both DETI and the Department of Finance and Personnel (DFP) were criticised for “significant missed opportunities”. DETI failed to review the RHI scheme when it should have done – which was a chance to “identify latent or emergent problems with the scheme” - and the DFP “mishandled the granting of approval for the domestic RHI scheme in 2014, which was a significant missed opportunity to break the chain of unsatisfactory events” relating to the scheme.

There was a “repeated failure to comply with the intent and provisions” of the legislation regarding the appointment and conduct of special advisers. Without mentioning names he referred to the “undermining of trust” between the then DETI Minister Jonathan Bell, who blew the whistle on the RHI scheme in December 2016, and his DUP special adviser, who was Timothy Cairns.

Sir Patrick generally was critical of the special advisers or spads. He noted, “Instances of unacceptable behaviour by special advisers included one special adviser sharing various confidential government documents, not just related to RHI, with family members and other third parties.”

While DETI “should not have ended up in the position where an urgent suspension of the scheme was required and could only be effected by means of further legislation”, the report found that, having reached that position in December 2015, the department was “right to seek to suspend or close the NI RHI scheme as quickly as possible.”

The two-week delay to the closure – during which there was a spike in applications to the scheme – was “within the reasonable range of responses available to the Executive.”