Policies and process should be improved, report finds 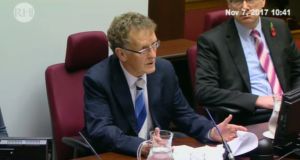 A video grab taken from the Renewable Heat Incentive inquiry of Sir Patrick Coghlin addressing the opening of the inquiry. File photograph: PA

It found no evidence of corruption in the operation of the scheme, although there were examples of “unacceptable” behaviour. Sir Patrick Coghlin’s report was also was critical of First Minister Arlene Foster but allowed that she was given incorrect information by her officials about the scheme.

Three years and two months after the inquiry into the controversial scheme was ordered Sir Patrick in his detailed report found that the scheme was “novel, technically complex and potentially volatile.”

His report made 44 recommendations which it said were based on the “systemic shortcomings” identified in the Inquiry’s findings.

A number of these involve strengthening the policies and processes by which new policies are developed, encouraging more effective co-operation between departments, agencies, the civil service and consultants, and specific training for ministers and civil servants.

Sir Patrick also recommended that the roles of, and relationships between, Ministers and their special advisors should be clarified, and that there be a new Code of Conduct introduced for special advisers.

“Ministerial decisions should be taken by Ministers ... and by no-one else,” he said.

“Notes of significant meetings between officials and Ministers, particularly those affecting decision-making and spending, must be taken and retained.”

In regard to the civil service, Sir Patrick said “the culture and practice of record-keeping and access to records ... needs to change” and there should be a “fundamental shift” in the approach used in the civil service with regard to recruitment and selection.

All Departments, he said, “would benefit from reviewing how their governance systems work” and “civil servant should be encouraged not to feel in any way inhibited about disclosing possible or emerging problems, raising concerns, negative aspects or adverse criticisms of a project as necessary to ensure that decisions are properly informed.”

Sir Patrick also recommended that the Code of Conduct for Northern Ireland Ministers be revised and brought up to date to reflect the findings of the inquiry, and that there be a future role for the Northern Ireland Audit Office in “assessing and validating the extent of progress in implementing the lessons learned from the NI RHI scheme.”

The North’s Executive and Assembly, he said, should “give due consideration to an independent mechanism to assess compliance with codes of conduct in public life.”

The inquiry’s belief was, he said, that “if its recommendations are followed, both in letter and spirit, it will be much more difficult for the types of general problems discovered in respect of the NI RHI scheme to reoccur.” - Gerry Moriarty and Freya McClemants.

‘If you apply for a driving test now, you might get one by June’ 23:57
UK government to announce decision on Finucane murder inquiry 21:05
Sinn Féin TD Brian Stanley apologises for ‘inappropriate’ tweet 20:38
Gardaí predict increased number of shebeens over Christmas 19:34
Covid-19: 299 cases and two further deaths reported in State 19:07