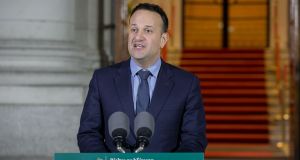 Taoiseach Leo Varadkar: Ahead of talks with Fianna Fáil, he said his party was “needed to stand by the State and our Republic”. Photograph: Gareth Chaney/Collins

Talks between Fine Gael and Fianna Fáil on forming a government will begin on Wednesday after a breakthrough between the two parties came amid increasing fears in political circles about the coronavirus.

The leaders also said they would continue talks with the Green Party, which senior figures in both parties hope will join a historic coalition government.

The move towards a coalition between the two parties – rivals since the 1920s that have never before shared power – comes more than a month after a general election that saw both lose seats and Sinn Féin’s popularity surge.

Fianna Fáil currently has 37 TDs and Fine Gael has 35, meaning an alliance of the two would be eight votes short of a Dáil majority. This means additional support would be needed, with the Green Party and its 12 TDs seen as a possible route to securing a majority in the House.

Fine Gael and Fianna Fáil have refused to speak to Sinn Féin, which has 37 TDs, about forming a government, making a combination of the two the only viable administration.

However, despite the progress reported last night, there remains considerable resistance to the idea of the rivals coalescing in both parties.

An initial meeting will take place on Wednesday and this will be followed by more detailed exchanges in the coming days.

A spokesman for the Taoiseach said Mr Varadkar would seek the approval of the Fine Gael parliamentary party next week before “formal” talks on a programme for government take place.

The breakthrough after weeks of inconclusive contacts between various parties comes amid mounting concerns in Government about the threat from coronavirus, and the social and economic impact its spreading could have.

“Both leaders are acutely aware of the enormous challenges facing the country particularly with the onset of Covid-19,” the party statements said.

In an email to Fine Gael members, Mr Varadkar said his party was “once again . . . needed to stand by the State and our Republic”. He said he had intended to allow Fianna Fáil and Sinn Féin time to try to form a government “either together or separately” but that the “public health emergency” posed by Covid-19 changed the context.

In a video message to Fianna Fáil members, Mr Martin said the “public health crisis” presented by coronavirus made the formation of a government “an imperative”.