Miriam Lord: Seanad candidates get their campaigns in full swing 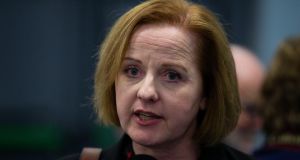 This is the weirdest election, with its complicated nomination system of inside and outside panels, nominating bodies, exclusive electorate and bizarre count process. It’s in full swing now, not that many people have noticed. The votes will be counted on March 30th. Counting will take forever.

There are 29 candidates in the mix for three seats on the NUI panel, with the outgoing trio hoping to make a return to the Upper House next month. Michael McDowell, Rónán Mullen and Alice Mary Higgins will face a number of candidates who ran unsuccessfully last time out, among them Laura Harmon of the National Women’s Council, who bowed out on the 28th count in 2016.

The entry of former TD Ruth Coppinger into the race will be interesting. It is unlikely that Coppinger, who was to the forefront of the Repeal the Eighth campaign, will trouble socially conservative Rónán Mullen’s loyal consitituency. However, it remains to be seen what effect her presence will have on the rest of the voting graduates.

On Friday, the former Solidarity TD for Dublin West lined up former tánaiste McDowell in her sights, accusing him of having “an unacceptable blindspot about sexism and sexual harassment” after he made complimentary remarks about billionaire Mike Bloomberg, who dropped out of the US presidential race last week. In a press release, she took the former Progressive Democrats leader to task for calling Bloomberg “an urbane, sophisticated gentleman” in his Irish Times column.

“This is a billionaire who has subjected female employees to disgusting comments and harassment – calling women ‘fat broads’, ‘horse-faced lesbians’, commenting that they have ‘nice tits’ and that he’d ‘do that piece of meat’. Does Senator McDowell have any problem with these comments which display a bare-faced misogyny?”

In his opinion piece, which primarily considered the detrimental effect of TV debates on the democratic process, McDowell suggested that while American voters were not swayed by Bloomberg flashing the cash, his massive election spend may have refocused “attention on the real issue for the Democrats – defeating Trump”. But fellow Seanad candidate Coppinger was more concerned about his passing comment about Bloomberg’s personality – McDowell found him very agreeable when they met once in New York. What about the #MeToo movement, which the “billionaire misogynist” raised doubts about? “Does Senator McDowell feel the same?” Furthermore, thundered Coppinger, her rival’s comments were “especially crass in the lead-in to International Women’s Day and a week after the conviction of [Harvey] Weinstein”.

And so to the election. Having Michael McDowell and Rónán Mullen as two of the three current NUI senators “points up the value of having a socialist feminist voice in the Seanad –an institution which seems to harbour backward ideas and privilege”, said Coppinger. She didn’t mention Alice Mary Higgins, the third Senator in the bunch. Alice Mary is no slouch when it comes to standing up for women’s rights.

We thought it only right to ring up leading senior counsel McDowell and ask him about his apparent “unacceptable blindspot”. He was somewhat taken aback by the contents of Coppinger’s press release. “Her remarks and her literature try to conceal the fact that I have spoken and written strongly in support of the Marriage Equality referendum and the Repeal the Eighth referendum. I think I’ll leave the rest of the tirade without comment.”

SF’s Fintan Warfield lets his music do the talking

It’s all go in Sinn Féin these days. We see outgoing Senator Fintan Warfield, who is back in the hunt for a seat on the Cultural and Educational panel, launched an album a couple of weeks ago. Fintan is a talented musician and his most recent appearances have been at Sinn Féin rallies around the country where he led the singing of the National Anthem at the end of proceedings. Fintan, one of the Wolfe Tones Warfields, performs regularly with The Young Wolfe Tones. This is his first solo effort. It’s called Step It Out Mary Lou. No, sorry. It’s called Step It Out Mary and tracks include The Rocky Road to Dublin, Meet Me at the Pillar, The Boys of Fair Hill and The Dying Rebel. It’s available at Connolly Books, Claddagh Records and the Sinn Féin bookshop.

Short-serving TD Malcolm Byrne in it for the long haul

“I’m kind of a professional canvasser at this stage,” says Fianna Fáil’s Malcolm Byrne, who has fought five election campaigns in the last 10 months, losing two and winning two, and now slap bang in the middle of his fifth.

Byrne, a long-standing councillor in Wexford, contested the local and European elections last May. He was re-elected to the council but was pipped at the post for the final seat in Ireland South. In November, he won the byelection caused by Mick Wallace’s departure to Europe and took his seat in the Dáil on December 3rd. The House sat for eight days before the Christmas recess and never reconvened.

Taoiseach Leo Varadkar called a general election and Malcolm was on the road again. Two of the candidates he defeated two months earlier won Dáil seats – Independent Verona Murphy and Sinn Féin’s Johnny Mythen, who pulled in just under 25 per cent of the votes.

Now Malcolm is running for a seat on the very competitive Cultural and Educational panel, where five Seanad berths are up for grabs. The 20-strong field is top-heavy with former TDs and senators looking to stay in politics at a national level. Given his travails of the past year, it seems appropriate that he has been nominated for the panel by the Drama League of Ireland.

This election is also taking a financial toll on the short-serving, if not the shortest-serving TD. Byrne is on a career break from his job as head of communications with the Higher Education Authority. As he didn’t clock up the required six months’ service he didn’t qualify for any severance payment, and is now dipping into his savings as the long Seanad campaign grinds on.

A communication arrives on behalf of a candidate for the Agricultural Panel. “Businessman Richard Mulcahy, grandson of Gen Richard Mulcahy, has secured a nomination from the Royal Dublin Society. He will now tour the country in an effort to secure support from local county councillors, deputies and Senators ahead of Seanad voting at the end of March.”

Torchlight processions, we hope. Mulcahy is running as an Independent, focusing on two key pillars: sustainable local agri-business and inclusive communities for the ageing population. Having spent most of his life as a very successful entrepreneur and chief executive of start-up companies in areas including retail pharmacy, electronics, software, catering, construction and forestry, he sold up a number of years ago and is now involved in business at a local community level, working in an advisory capacity with Wexford County Council to help attract new businesses to the county.

“Now, like my grandfather, I’d like to influence and shape policy and debate at a national level,” he says in a press release issued by a Stillwater Communications. “Following his family’s philanthropic tradition, Richard has led and donated to the opening of a new park in Wexford in collaboration with Wexford County Council. The 18-acre park, named the Min Ryan public park after his grandmother who was romantically involved with Seán Mac Diarmada at the time of his execution in the aftermath of the 1916 Rising, is due to open this April and will be the first park in Ireland to be named after a woman.”

You know what you can do with that Swiss roll

The days of Seanad candidates arriving at councillors’ homes bearing gifts in an attempt to butter them up for a vote are largely a thing of the past. No reports doing the rounds this time of silk ties and scarves, music CDs and bottles of hard liquor being pressed upon potential supporters.

However, one councillor in the southern end of the country who is hoping to make the step up to the Upper House tried to get on the good side of a fellow local representative by presenting him with a Swiss roll when he arrived for the canvass and a cup of tea. The recipient of the cake subsequently met a council colleague who was also soft-soaped by the same candidate. Only this time, the sweet inducement was a much larger apple tart. This didn’t go down well.

So will you give him your vote, the first councillor was asked.

“I will in me Swiss,” came the Cockney-rhyming reply beloved of hard-chaws everywhere.