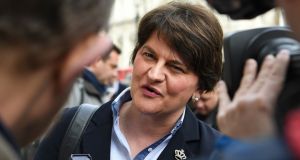 The Northern Ireland Executive has decided against following the lead of the Irish Government and is not ordering the closure of schools and universities in an attempt to limit the impact of the coronavirus.

The North’s First Minister, Arlene Foster, also complained on Thursday evening that the Northern Executive was not informed in advance of Taoiseach Leo Varadkar’s decision in Washington to announce a number of actions to address the Covid-19 emergency.

Ms Foster said it was “disappointing” that the Executive was not apprised in advance of the Government’s decision. She said the Executive had “no prior knowledge” of Mr Varadkar’s announcement.

On North-South co-operation in relation to coronavirus, Ms Foster said, “We have had very good interaction, not only between ourselves at political level, but also at medical officer level. We were just made aware, I think, about 10 minutes before the statement was made by the Taoiseach . . . We did not know what the content of that statement was going to be. And I think that is disappointing that is the case but, however, he made his decision and he has to carry through with that.”

Hitherto, the North’s Minister for Health, Robin Swann, said he was in virtually daily contact with his southern counterpart, Simon Harris.

Asked did she think Mr Varadkar and the Government had made the wrong decision, Ms Foster said, “It is not for me to second guess what the Irish Government has in front of them and indeed they are in a different situation in terms of they have a community transfer [of the virus] – we do not have that as yet.

“This is all about timeliness and that is the important issue for us,” she added.

Senior Dublin and Belfast Ministers are to meet in Armagh on Saturday under the aegis of the North South Ministerial Council to plan how to co-operate in responding to coronavirus on an all-island basis.

It was also confirmed that Northern Ireland was moving from the “containment” to the “delay” phase in dealing with Covid-19. On Thursday it also was announced that two more people, two adults, in Northern Ireland had tested positive for coronavirus, bringing the total number in the North to 20.