Taoiseach Leo Varadkar has met President Donald Trump in Washington DC where they discussed the coronavirus pandemic and other issues. Video: C-Span 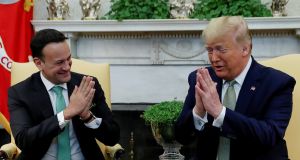 On the other side of the ocean, morning time stood still and a nation waited.

In an old building across from the White House, they waited for the dawn.

At first light, Leo Varadkar walked down the steps of Blair House in Washington, its vintage chandeliers glittering behind white plantation shutters.

Everything was in place outside – the wooden podium, the gold-fringed Tricolour and a carefully positioned dispenser of sanitising fluid.

The fact that the Taoiseach was in another country when he effectively announced a state of emergency in Ireland added to the drama. While his speech may have been live-tweeted, live-blogged and live broadcast across the Atlantic, that sense of dislocation delivered an old-fashioned twist.

“Good morning. I need to speak to you about coronavirus and Covid-19,” he began as we imagined people gathered around smartphones and televisions and radios back home, hanging on his every word.

“We have not witnessed a pandemic of this nature in living memory. This is uncharted territory” he intoned, capturing his place forever in Irish history. “We said we would take the right actions at the right time. We have to move now to have the greatest impact.”

He spoke slowly, almost hesitantly. It had been a long night. He seemed nervous. Suit a little rumpled. The microphone system stuttered and sprayed static into the speech, which also suited the feeling that something extraordinary was happening.

He was introducing unprecedented lockdown measures because “we have a duty to protect others”. The Government will be deploying all resources they can muster – “human and financial”.

These were the clinical words, uttered thousands of miles away from the epicentre of a crisis, which launched 100,000 supermarket trollies across a frazzled nation. The words which saw the toilet roll take over from the large sliced pan as the apocalypse item of choice.

In the crisp, early morning cool of America’s capital, the Taoiseach’s poorly amplified voice competed with the sounds of city traffic – car horns, police sirens and the constant rumble of heavy vehicles. When he looked directly across the road from where he stood, did he notice the two old cannons at the doors of the vice-president’s offices trained directly at him?

And to his left, the pillars and porticos of Donald Trump’s White House. The Taoiseach would be his guest in the Oval Office a few hours later, after paying a breakfast courtesy call to the official residence of VP Mike Pence.

The post-dawn set-piece presented a strange scene – so far away and yet so near to the heart. Even before Leo finished speaking, messages were coming through of buying sprees in the shops back home. Queues outside Dunnes. Empty shelves in Supervalu. Stories of phone networks crashing. People ringing to hear what it was like in Washington. Nothing like it was in Ireland, by the sounds of it.

Although an embassy staffer told us that the carry-on across the sea wasn’t unique. There are branches of Aldi supermarkets in DC too and apparently there is a major run, so to speak, on the toilet tissue there too. People are all the same.

Ambassador, with this sanitiser you are really spoiling us!

Perhaps to underline the gravity of the situation, or to buy some more time, Varadkar did not take any questions. To the Trumpian accompaniment of journalists’ questions shouted into nothingness, he turned on his heels and went back inside.

The US official removed the props, including the sanitiser. “Purell, anyone?” he had asked when he brought it outside. In diplomatic circles, nutty chocolates wrapped in gold foil are nothing these days. Instead, the best parties offer a silver nectar of antiseptic.

“Ambassador, with this sanitiser you are really spoiling us!” You can’t get the stuff for love nor money here.

We didn’t see any on offer in the famous White House press briefing room either. And none inside or directly outside the Oval Office, the working space of self-confessed germaphobe Trump.

The magnolia trees on the White House lawns were in full bloom for the Taoiseach’s arrival. The military colour party snapped to attention. He is far more relaxed now when he comes to see the president – an old hand at it, even if there was no shaking of it involved on Thursday.

The president explained what happened when he greeted his Irish guest.

“Well, we didn’t shake hands today. We sorta looked at each other and said ‘what are we gonna do?’ It’s sort of a weird feeling.”

They didn’t fist bump either. According to Trump, they exchanged the non-contact Indian-style Namaste greeting – fingers upwards, palms joined and a little bow of the head. He likes this because he isn’t a great guy for handshakes. (That’s not to say he isn’t an enthusiastic hands-on guy in other circumstances.) However, when the Taoiseach emerged from his people-carrier door, you see Leo making the traditional gesture while the president chose to go full Enda Kenny, giving him a hearty slap on the upper arm.

“It’s feels impersonal, it feels like you’re being rude but you just can’t afford to think like that for the next few weeks,” said Leo.

With the early evening shamrock ceremony cancelled, the usual bowl of foliage was redirected to the Oval Office and placed between the two leaders, so neither of them had to touch it.

This was probably more crucial for Varadkar than it was for Trump. The US president seems to have had contact with quite a few carriers of the virus at this stage. Not that he seems bothered.

After the meeting, word came through that Canada’s Justin Trudeau had self-isolated. Huh, typical. But what will Leo do now?

The Taoiseach played it very well in front of the cameras. He was a polite guest and spoke sensibly and calmly about the coronavirus crisis. The president sat forward in his small gold chair in that familiar pose, hands held low and steepled. The Taoiseach did likewise most of the time.

Trump seemed interested when he spoke, watching him and genuinely listening, not sulkily giving the impression he was only there because he had no choice.

There was some wonderful explaining from him on the medical front. “People have, you know – we call it ‘cases’. [As in] ‘How many cases do you have?’”

Trump was wound up. He held forth for nearly half an hour. Perhaps because he is in the midst of a national crisis he feels the need to keep talking.

There was some wonderful explaining from him on the medical front. “People have, you know – we call it ‘cases’. [As in] ‘How many cases do you have?’” This gave him the chance, not the first time, to say America had very few cases compared with smaller countries which had many more.

Unfortunately, when he mentioned the number of deaths recorded so far in the US, his figure was out of date.

The main thing to remember, while “this is a fast spreader”, is everything is going to be fine. “It goes away. It’s going away. We want it to go away with very, very few deaths.”

As for his beloved stocks and shares? “The markets are gonna be just fine,” he declared, as they were spectacularly tanking.

The difference between the Taoiseach and the president’s approach was striking. Leo said what was going to be done and why and how and for what length of time. He said it would be difficult but it would be for the common good. Donald said he took the “boldest step of all” by blocking flights from China. “It turned out to be in a great move.”

But Europe didn’t do the same and brought the virus to America so he’s blocking Europe now. He consulted the “major” leaders on this but not all of them. They didn’t consult him when they were making their big decisions.

But unlike Leo, he couldn’t specify very much. Except that he may have to cancel some of his famous rallies.

Of course, the Democrats have made a big thing about cancelling but “nobody showed up to their rallies anyway”. No so for the Donald. “My rallies are very big. They are very big rallies.”

The Taoiseach listened while the president did most of the talking. His expressions were a delight – polite smiles, eyes slightly widening.

Whether Leo returns as Taoiseach remains in the lap of the post-electoral gods. And what about Donald, would Leo like to see him back in the White House?

He gave a startled look but then smoothly replied: “That, of course, is a matter for the American people, but president Trump and any American president is always welcome in Ireland.” An excellent fudge. His host didn’t notice it.

He says the Irish are welcome in the White House. “Always, always, always. Just like your prime minister, always . . . we love the Irish.”

Which is more than you can say for Democrat Nancy Pelosi, the Speaker of the House of Representatives. He snubbed the annual Friends of Ireland luncheon on Capitol Hill this year because she was hosting it.

“I have other things to do. I’m very busy,” he pouted.

By the evening, having confirmed that the Defence Forces are at the ready, the Taoiseach and his team were on their way back home. And proper order too.

His speech, the famous Washington one for posterity, struck the right note.

Now he must deliver on it and his final words.

Covid-19 restrictions in Europe: how does Ireland compare? 16:03
New children’s hospital will not be able to open all beds due to staff shortages, nurses say 15:56
Edwin Poots says he never sought to offend Catholics with Covid comments 15:45
‘It was hard enough the first time’: Clothes retailer mulls return to lockdown 15:24
Martin only told of contact tracing problem when texted Irish Times story 13:57