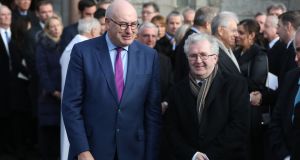 Former European commissioner for trade Phil Hogan has said his resignation over his attendance at a controversial Oireachtas Golf Society dinner in August was “disproportionate”.

Speaking in an interview published in the Irish Independent, Mr Hogan said he was not afforded due process amid a “political frenzy” following the dinner in Clifden, Co Galway.

More than 80 guests – primarily politicians – attended the dinner in two rooms divided by a partition at the Station House Hotel, in apparent breach of Covid-19 public health guidelines limiting gatherings.

“I think most fair-minded people thought what happened was disproportionate, and that has been by the due process that was given to Justice Séamus Woulfe and the report that was done by Susan Denham,” Mr Hogan said.

“It would have been nice if I had got some kind of due process. When that was given to Séamus Woulfe, you can see full details were able to emerge,” he said.

Mr Hogan resigned after several days of sustained pressure over his attendance at the dinner, and scrutiny over his movements around Ireland in the days beforehand after he returned from Brussels.

At the time the former Fine Gael minister had insisted a negative Covid-19 test excused him from quarantining after arriving in Ireland from Belgium, and exemptions for essential work meant he was permitted to break local lockdown restrictions in Co Kildare.

European Commission president Ursula von der Leyen had requested he provide an account of his movements while in Ireland, with his resignation following in the days afterwards.

In the interview, Mr Hogan said he felt there was one set of standards and criteria for politicians, and another for those who were not elected officials. “But it was the context, I suppose, of the political frenzy at the time last August,” he said.

Rise TD Paul Murphy was critical of the comments made by the former commissioner.

“The fact that Phil Hogan still doesn’t get it underlines how wildly out of touch he and the rest of the political establishment are. He broke multiple Covid guidelines while people were suffering massively, yet still thinks he was in some way hard done by,” he said.

The scandal also saw the resignation of Dara Calleary as minister for agriculture, and a number of Fine Gael and Fianna Fáil Oireachtas members and councillors lost the party whip.

Supreme Court judge Séamus Woulfe, a former attorney general, faced calls to resign from his position over his attendance at the dinner, but did not do so.

In a report into his actions, former chief justice Susan Denham concluded seeking his removal would be “unjust and disproportionate”. However, there were renewed calls for Mr Justice Woulfe to step down following the release of transcripts of his interview with Ms Denham, which reignited the controversy.