Brexit outcome may see Varadkar call election well before May

Analysis: Taoiseach uses Fine Gael think-in to have a go at Fianna Fáil 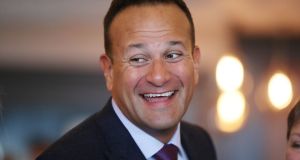 Taoiseach Leo Varadkar warned that the Green Party (despite his intention to steal some of their policies) could be “the Trojan horse” that allows Fianna Fáil back into government. Photograph: Niall Carson/PA

For a Government that says it is too busy with important matters of state such as Brexit and Budget 2020 to concern itself with less important matters, Fine Gael spent an awful lot of time talking about a general election at today’s parliamentary party think-in at Garryvoe, Co Cork.

Taoiseach Leo Varadkar began his address to TDs and senators this afternoon telling them that the election should be next May. And though this is not a new brainwave of the Taoiseach’s – he has said it several times in the past year, and wrote to Fianna Fáil leader Micheál Martin last summer with the proposal – it is significant that he should choose it to be the message he sends out today.

Why? Because he wants to keep the idea of an election prominent in public debate. If Brexit falls a particular way, Varadkar may want to go to the country a good bit earlier than next May. At least some of his ministers believe that if Brexit is resolved in October – with a tweaked withdrawal agreement, or an extension – then it may be in Fine Gael’s interests to conjure a November election.

If a deal was made possible by some “statecraft” (as Boris Johnson says) by Varadkar and his colleagues at the European Council – a stage he loves – then so much the better; Varadkar needs a Brexit boost in the polls. Micheál Martin might not agree with Varadkar’s preferred date, though. He is likely to prefer an early spring election, after a winter of waiting lists, crowded emergency units, and homeless children. Either man can precipitate an election at any time of course – but neither will want to be held responsible for it.

Varadkar wasn’t just ruminating about possible dates. He also used the opportunity to have a go at Fianna Fáil (“They can’t be trusted”), and several of his ministers, notably Charlie Flanagan, followed suit. He also warned that the Green Party (despite his intention to steal some of their policies) could be “the Trojan horse” that allows Fianna Fáil back into government. Varadkar also had a cut at Sinn Féin; but didn’t mention the Labour Party, either because he wants to cosy up to the party, or because he thinks it irrelevant. The former, probably – it’s a seldom acknowledged fact that Labour did better than the Greens at this year’s local elections, hailed widely as a Green tsunami.

Despite the bullishness about a general election, Varadkar was a good deal more circumspect about the four forthcoming byelections. His aim, he said, would be to win one of them and garner enough votes for a general election quota in the others. It is, of course, very difficult for governments to win byelections. It is also hard for parties to win three elections in a row. So references to the Enda Kenny years have been banished from the Fine Gael lexicon – everything now dates from when Varadkar became Taoiseach in 2017, not from when Fine Gael came to office in 2011. “When I think about all we’ve done in the past two years . . . ” he began.

It’s always debatable how much thinking is done at the think-ins. They serve a motivational and organisational purpose for the parties. They’re also used to communicate with the public. The message from today: there’s an election on the way, sooner or later.