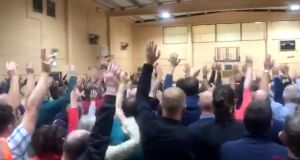 A show of hands was taken at the meeting in Oughterard. Photograph: Gearóid Murphy/Twitter

Taoiseach Leo Varadkar has called on Noel Grealish to make a statement on controversial comments the Galway West TD made about African migrants at a public meeting this week.

The Independent TD told the meeting in Oughterard, Co Galway, attended by 800 people, that Africans arriving into Ireland were economic migrants “sponging off the system”.

He received a loud round of applause after concluding his speech claiming the creation of a direct provision centre in the town would “destroy the fabric of Oughterard”.

The public meeting on Wednesday night had been called over speculation that a reception centre for asylum seekers may be located in a disused hotel close to the town.

Some other people who spoke at the meeting referred to asylum seekers as “those people” and, according to a number of those who attended, other offensive remarks were made.

A number of speakers addressed the crowd, including Seán Kyne, the Government chief whip and from the area, who was heckled and booed by some sections of the crowd. But Mr Grealish’s comments sparked criticism from politicians, on social media and from anti-racism campaigners. Mr Grealish did not respond to numerous calls and texts from The Irish Times.

Speaking to journalists at the Fine Gael think-in in Cork on Friday, Mr Varadkar said: “I haven’t heard those comments, I haven’t heard the audio myself but if what’s said is true I think he needs to withdraw those remarks and certainly issue a statement to clarify what he said.

“We don’t have a formal arrangement with Noel Grealish in the Dáil. He is an independent, very often votes with the Government, sometimes doesn’t.”

Meanwhile, videos that appear to have been taken by an attendee at the meeting were posted on Twitter on Thursday night. In one of the videos, posted by Gearóid Murphy, Mr Grealish can be heard addressing the crowd.

He said: “Now I have worked with one or two Syrian families. These were genuine refugees who were persecuted in their homeland, because they were Christian, by Isis. They were housed around Galway, put in houses, they were accepted by communities.

“If you watch the news, and even our Taoiseach said two weeks ago that he would take an extra 200 what-do-you-call migrants from Africa.

“These are economic migrants. These are people coming over here from Africa to sponge off the system here in Ireland,” Mr Grealish said.

“I can guarantee you it is not the persecuted Christians and Syrians that are coming here. It is the economic refugees that is coming in from Africa that are trying to get across the Mediterranean and ended up in Europe and ended in up Ireland and ended up in Oughterard.

“I will say one thing to everybody in this room here tonight, work together, stick together and we will work with ye. I want politicians here to give the same commitment here tonight that we will work to ensure that this does not happen. It will destroy the fabric of Oughterard. Thank you.”

“He was not the only person who said that. A phrase was used more than once, ‘those people’, which I was unhappy with. I was heckled once or twice. I asked them to consider my points and they did listen,” she said.

Ms Connolly there was a lot of anger which she understood. She said the Department of Justice, by refusing to give any information about its plans, had allowed a vacuum of information to develop.

Mr Kyne told the meeting there was a tender process ongoing in the west to find locations for new asylum centres but that this was under the remit of the Department of Justice and neither he nor his colleagues were privy to information about any applications.

Joe Loughnane, from the Galway Anti-racism Network, called on Mr Grealish to resign over the comments.

“I have never heard a TD saying something like that in my life,” he said.

The Irish Times understands the Department of Justice is in negotiations with the long-closed Connemara Gateway hotel near Oughterard to house “less than 250” refugee and asylum seekers there.