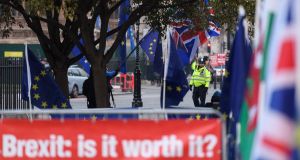 The omnibus Bill covers contingencies in the event of a no-deal Brexit across all Irish Government departments. Photograph: Leon Neal/Getty Images

A special committee should be established to facilitate the speedy passage of the omnibus Bill that provides for a hard Brexit, the Sinn Féin whip has suggested.

The heads (draft) of the omnibus Bill were published last week and the 95-page document covers contingencies in the event of a no-deal Brexit across all Government departments.

If the British government and the EU fail to reach an agreement, and a no-deal Brexit has become a certainty, the legislation must be enacted by March 29th, the date on which Britain must leave the EU.

To expedite the process, the Sinn Féin whip Aengus Ó Snodaigh has floated the idea of a special ad hoc committee to scrutinise the Bill, which would be flexible enough to allow spokespeople to appear at committee when their particular area is being discussed.

There are 17 sections in the The Miscellaneous Provisions (Withdrawal of the United Kingdom from the European Union) Bill covering all major areas of economic, social, transport, health and justice activities.

The timescale is incredibly tight. The emergency legislation is currently in draft form and will be published in full on February 22nd. The Government is confident it can pass through the Oireachtas by March 14th.

Mr Ó Snodaigh said the special committees had been formed to deal with once-off issues such as the referendum to repeal the 8th amendment, and for Sláintecare. He said such a committee might be more efficient.

The main Opposition parties have indicated they will cooperate with the passage of the legislation, which will only be required if there is a no-deal Brexit. The possibility of that has increased as the deadline moves nearer.

However, the Fianna Fáil whip Michael Moynihan said there might not be a need for such a committee, given the level of support for the Bill.

“My understanding is that committee stage of the Bill will be taken in the Dáil [rather than in the committee rooms],” he said.

“All the line Ministers will be present to deal with their own area. I imagine pre-legislation scrutiny will be waived.

“I’m not sure if there is a need for a special committee but I will see what is proposed,” said Mr Moynihan.

The business committee is expected to discuss the legislation at its meeting today. All the parties say they are conscious of the very tight deadline, with only a matter of weeks to debate and agree a long and complex piece of legislation.