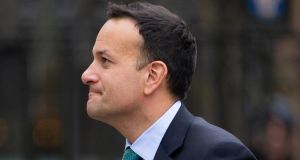 Taoiseach Leo Varadkar. British prime minister Theresa May offered no new ideas on how to avoid a hard Border in a telephone call with him on Wednesday night. Photograph: Tom Honan

EU official and diplomatic sources said while support for Ireland would remain strong and consistent in the weeks ahead, the logic of the situation was that Ireland would come under pressure on the backstop.

“There will be no pressure from us,” said one EU diplomat. “But the situation will bring pressure.”

EU officials and diplomats believe that with Britain facing a possible crash out, the option of softening Ireland’s stance on the backstop would inevitably be discussed – though all who spoke to The Irish Times said that the EU would not try to persuade or pressure Ireland. “It will be your call,” one said.

Last night the British prime minister Theresa May offered no new ideas about avoiding a hard border in a telephone call with Taoiseach Leo Varadkar and senior Irish Government sources now say they will “sit tight” until Mrs May comes forward with proposals.

As relations between Dublin and London grow ever frostier, Mr Varadkar is understood to have told the Fine Gael parliamentary party last night that he told Mrs May it is unusual to go back on an agreement.

Both the Taoiseach and the Minister for Foreign Affairs Simon Coveney – along with EU leaders – reaffirmed their unwillingness to renegotiate the withdrawal agreement and the backstop, as Mrs May has pledged to her MPs she will do.

In London, Mrs May told the House of Commons that the proposal she will present to the EU on the backstop would be based on the concerns expressed by MPs. She said her colleagues had suggested putting a time limit on the backstop or including a universal exit mechanism.

“The political declaration already refers to alternative arrangements and raises a number of proposals that can be addressed, such as mutual recognition of trusted trader schemes,” she said.

Labour leader Jeremy Corbyn met the prime minister to discuss his party’s call for Britain to remain in a permanent customs union with the EU. Mr Corbyn initially refused to meet Mrs May until she ruled out a no-deal Brexit but Labour sources said the meeting was cordial, adding that the two leaders would meet again soon.

“I set out the Labour case for a comprehensive customs union with the European Union, in order to protect jobs and trade. She certainly understood the point that we were making,” Mr Corbyn said afterwards. Mr Corbyn said that he had discussed Labour’s difficulties with the backstop with Mrs May, which the prime minister undertook to bring to the EU, but also reiterated his opposition to a no-deal outcome.

In Brussels, the European Commission president Jean-Claude Juncker told the European Parliament that Tuesday night’s vote at Westminster would not persuade the EU to renegotiate the text of the withdrawal agreement. And he counselled Britain against seeking comfort in the hope that the other 26 member states would abandon Ireland at the last minute.

“But this is not a game. It goes to the heart of what being a member of the EU means. Ireland’s border is Europe’s border and it’s our union’s priority,” he said.

Austrian chancellor Sebastian Kurz also ruled out reopening the withdrawal agreement and EU chief negotiator Michel Barnier criticised Mrs May for abandoning it. “She distanced herself from the agreement she herself had negotiated,” he said.