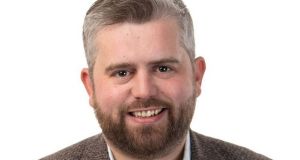 Councillor Peter Kavanagh said he resigned from the Green Party because of his opposition to the party’s culture following its decision to enter coalition. Photograph: via Twitter

A prominent county councillor has resigned from the Green Party citing difficulties with the culture within the party since it entered coalition with Fianna Fáil and Fine Gael.

Peter Kavanagh from Clondalkin is the fourth councillor to have left the Green Party since it entered government in June last year.

A member of South Dublin County Council and a candidate for Dublin Mid-West in the general election, he was the party’s spokesman on Irish and the Gaeltacht and he was one of the high profile representatives who opposed the coalition arrangement.

Cllr Kavanagh said on Monday he resigned because of the culture that now prevailed in the party.

“I have been subject to ongoing harassment and abuse by comments that were being portraying me as disloyal,” he said.

He said there was no “breaking point” that decided his departure rather what he described as a culture that has evolved in the past number of months.

“Any questioning of policy by me was portrayed as a disingenuous attempt by me to bring down the party, which is just untrue,” he said.

He said he had received anonymous phone calls abusing him and emails from “throwaway accounts” as well as anonymous online abuse.

He when Eamon Ryan made a “mis-step” by using the “N word” in the Dáil, he criticised him for it and was in turn accused of being disloyal.

He said similar criticism by him of Minister for Education’s Norma Foley’s abandoned decision to reopen schools for some students led to him being accused of spreading misinformation.

A number of other prominent councillors have resigned from the party in recent months including Lorna Bogue in Cork, and – only last week – Liam Sinclair of South Dublin County Council and Sophie Niccollaud of Dublin City Council. Mayo-based European and Dáil candidate, Saoirse McHugh, also resigned last year.

Mr Kavanagh also said that many other members of the Green Party had also left because they felt their voices were no longer welcome.

In a tweet on Monday, Mr Kavanagh said: “Unfortunately, my voicing opposition to Government decisions within the party has been met with a culture I cannot reconcile with the values of the Green Party/Comhaontas Glas.”

He said he remained committed to serving people in the South Dublin County Council with the support of his former party colleagues.

Mr Kavanagh said he would remain as a member of the Just Transition Greens group, but would not join another party. “At this moment of time I am going to serve as an Independent councillor over the next few months I will decide what I want to do in future,” he said.