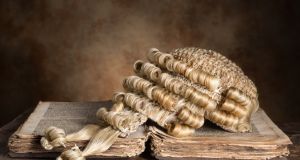 The Cabinet has approved plans to give the judiciary a pay increase in line with other rises in the public sector despite concerns raised by the Green Party. Photograph: iStock

The Cabinet has approved plans to give the judiciary a pay increase in line with other rises in the public sector despite concerns raised by the Green Party.

There was unease in political circles on Tuesday morning at the move which comes at a time when the Government has been criticised for not providing student nurses with full pay rates.

The Government has also approved plans to restore pensions which were previously reduced for those with a higher income.

Sources have confirmed that the Minister for Culture Catherine Martin raised concerns about the moves during a Cabinet meeting on Tuesday.

Mr Mac Lochlainn said on Tuesday that the party would not be taking the increased allowances and would return the money to the exchequer.

A new system of extra payments for the three Ministers of State sitting at the Cabinet table has officially commenced. They will share €32,000 worth of allowances between them rather than getting a €16,000 allowance each. There was controversy earlier this summer over the payments to the super juniors.

The Government then announced that Mr Chambers, Hildegarde Naughton and Pippa Hackett “have decided to waive and gift back to the State the increased allocation which was approved by the Dáil” and instead split a €32,000 sum.

Tánaiste Leo Varadkar said that some people would seek to misrepresent the Cabinet decisions for political reasons.

He defended the move and said that ultimately the total cost of those allowances would be lower than in the last Dáil because there are fewer allowances. On the pay restoration for the judiciary, he said that “every public servant got a 2 per cent pay increase in October, with the exception of Government Ministers who declined it. Nurses, teachers, gardaí, civil servants and judges – they got that 2 per cent increase back in October, the same as everyone else. It wouldn’t be possible to single out one group and say they couldn’t get it,” Mr Varadkar said.

“The 2 per cent increase applied from October, applied to all public servants, and among them are judges, and what has happened at Cabinet today was just the legal order for that to happen.”