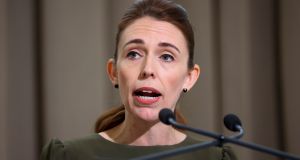 New Zealand prime minister Jacinda Ardern speaks to media in Wellington on Tuesday ahead of the release of the inquiry into the terrorist attack on Christchurch mosques. Photograph: Getty Images

Jacinda Ardern has apologised to New Zealand’s Muslim community for failings by authorities in the lead up to a white supremacist’s attack on two mosques in Christchurch last year that killed 51 worshippers.

The prime minister’s apology follows the publication of a 792-page public report on Tuesday after a public inquiry. The report found that the security services did not pay enough attention to the threat posed by rightwing terror while placing an “inappropriate” focus on Islamist extremism.

It also identified shortcomings in gun control laws and made a series of recommendations aimed at preventing massacres.

However, the report concluded New Zealand’s authorities could not have prevented the attack perpetrated by Brenton Tarrant, a 30-year-old Australian citizen, except “by chance”, as they had only fragmentary information about the “lone wolf” shooter before the shootings.

“On the matters of how the attack occurred and what could have been done to stop it, the commission found no failures within any government agencies that would have allowed the terrorist’s planning and preparation to be detected,” said Ms Ardern.

“But they did identify many lessons to be learned and significant areas needing change... While the commission made no findings that these issues would have stopped the attack, these were failings nonetheless, and for that, on behalf of the government, I apologise.”

The Labour-led coalition has appointed a minister to oversee implementation of the recommendations, which include reforms to hate speech, changes to firearms licensing laws and the creation of a national security and intelligence agency.

The former gym instructor used automatic weapons during the attacks, which were streamed live online, including on Facebook.

Tarrant posted a 74-page racist “manifesto” ahead of the assault that analysts said was geared to gain as much attention as possible. He was jailed for life without the prospect of parole in August.

The inquiry was headed by William Young, a supreme court judge, and former diplomat Jacqui Caine. It interviewed more than 400 people and received 1,100 submissions during its 18-month investigation.

The report details how Tarrant arrived in New Zealand from Australia in August 2017 and within days began planning the terrorist attack. His application for a firearms licence was approved within three months of his arrival.

New Zealand’s Muslim community has called for the implementation of the report’s recommendations.

“We’ve known for a long time that the Muslim community has been targeted with hate speech and hate crimes _ this report shows that we are right,” Abdigani Ali, spokesman for the Muslim Association of Canterbury, told New Zealand media. “It’s time for change and the time is ripe to make those changes.” – Copyright The Financial Times Limited 2020