There are no legal provisions for female TDs to take leave; position for ministers is unclear 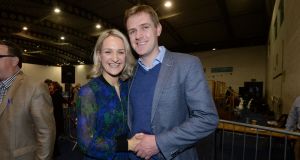 A legal reform promised more than 40 years ago but never delivered may have personal repercussions for Minister for Justice Helen McEntee.

The Meath East TD announced at the weekend she is expecting her first child next May, making her the first Cabinet Minister to be pregnant while in office.

However, there are no legal provisions to allow female TDs to take maternity leave. At present TDs have to provide a sick note if they wish to take time off to be with their newborn children.

It is also unclear if Ms McEntee has any statutory right to take maternity leave in her separate role as a minister, for which she is paid a salary.

The Minister herself said at the weekend she intended to take maternity leave but it is not clear if the Government will have to introduce legislation to facilitate this.

More than 40 years ago, Máire Geoghegan-Quinn had her second child while minister of state at the department of industry and commerce. Her son was born in July and she had to return to work in September, while still nursing her infant, as the government had taken over the presidency of the European Economic Community, as it was then.

Aside from no right for leave, there were no facilities for babies in Leinster House. Then-minister for finance George Colley supported Ms Geoghegan-Quinn in obtaining facilities but also arguing for more leave.

Ms Geoghegan-Quinn said Mr Colley wanted to do “the right thing not just for you but for any woman in your position in the future that has to face this situation, so let’s do it right”.

However, in the following years, while maternity facilities improved, the question of maternity leave was never addressed.

Fianna Fáil did try to introduce a Bill to allow for leave in 2018 but a number of constitutional issues arose, including whether or not the Dáil had powers to legislate for TDs absent from duty.