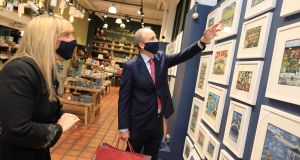 The Taoiseach Micheál Martin with Mary Keane, general manager at the Kilkenny Store, Dublin, during a spot of shopping on Tuesday. Photograph: Julien Behal Photography/PA Wire

The Taoiseach has said he does not envisage having to close sectors such as non-essential retail again, even if restrictions are re-introduced after Christmas, and has told Fianna Fáil TDs and senators that there is “light at the end of the tunnel” in the fight against Covid-19.

Micheál Martin told a meeting of his parliamentary party on Wednesday night that State agencies are working “flat out” on vaccine rollout, and indicated that healthcare workers, the elderly and those working in nursing homes are likely to be prioritised for inoculation, although final decisions have not been made.

He told the meeting that he expects three vaccines will be approved by the European Medicines Agency by early January, and that Ireland will have access to more vaccines, potentially up to ten, as part of the European framework agreement.

The Taoiseach told the meeting he believes there will be sufficient quantities of vaccine for everyone who needs one. He said he had received significant feedback on the move from Level 5 to Level 3 restrictions this week, and he felt people needed a break and some respite, and for Christmas to be meaningful.

There was also an update on Brexit from both Mr Martin and Minister for Agriculture Charlie McConalogue, both of whom said the talks between Brussels and London were entering into a “crunch” period and that the outline of a deal may emerge before the end of the weekend. There are still several issues to be resolved before a deal is struck, the meeting was told, with movement on dispute resolution and fisheries crucial.

The meeting also heard contributions from Cormac Devlin TD, who urged that the mental health of people should be considered in the context of Covid-19 restrictions. He said that non-essential retail should remain open after Christmas, and asked that restrictions on underage sports fixtures be relaxed if possible. He was supported by Eamon O’Cuiv who raised the need to allow organised activities like dance classes.

The Taoiseach said he and chief whip Jack Chambers would be engaging with youth and adolescent sports issues and dance classes and the issue would be reviewed in January.

James Lawless secured a commitment from the Taoiseach that the Government would not oppose a Sinn Féin private members bill due in the Dáil on Thursday to make Covid a notifiable disease in workplaces. Mr Lawless said it was originally a Fianna Fáil minister who had made similar diseases notifiable, but it had been taken out by a Fine Gael minister, Pat Breen. The Kildare North TD had highlighted this issue during the lockdown in the summer, when conditions in meat plants were under scrutiny.

The meeting heard an update too from Minister of State Anne Rabbitte on day care services for people with disabilities.

Ms Rabbitte also criticised her colleague, Minister for Health Stephen Donnelly, for not attending the meeting to give an update following a private members bill on nurse’s pay on Thursday morning.

The meeting also heard support for the reopening of wet pubs and other facilities. Marc MacSharry, the Sligo-Leitrim TD, said the EY report that was used to justify the closure of wet pubs,childrens play centres and amusements was “flawed”. He warned that with wet pubs closed, and many unable to operate as gastropubs, people would gravitate towards house parties which have been major drivers of infection. He argued there is a strong chance of having to lock down again in January, and that it may be months before we return to normal. He urged the Taoiseach to embrace other views on living with Covid rather than depend on vaccines alone.

Minister for Public Expenditure and Reform Michael McGrath told the meeting that he is ironing out anomalies in the Covid Restrictions Support Scheme (CRSS), which mean that hotels in some counties may not be able to get the subsidy as technically they can open, but are not generating income as no guests can travel into the county to stay there.

Minister for Education Norma Foley gave an update on the Leaving Cert, as around 2,500 students sat the postponed exams in November. She said planning is underway to ensure the Leaving and Junior cert exams go ahead as planned in 2021.

John McGuinness, the Carlow-Kilkenny TD, called for nurses registration fees to be waived or paid by the Government, and also raised the issue of nurses and midwives pay.