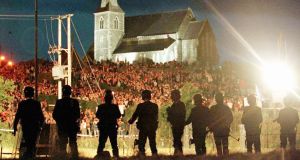 Police surround Drumcree Church as hundreds of Protestant Orange Order members fill the hillside on July 10th, 1996. The Orange Order were protesting over the refusal of police to allow the order to march through a predominantly Catholic area. Photograph: Crispin Rodwell/ Reuters

The disastrous effect of a decision to permit an Orange march through the nationalist Garvaghy Road to Drumcree Parish Church in Portadown in July 1996 is the subject of a previously restricted minute released under the 20/30 year-rule.

The crisis in Portadown began on July 7th, 1996, when the RUC imposed a ban on the traditional Orange march.

This resulted in violent conflict between 200 members of the RUC and thousands of loyalists. As the mob rained stones and bottles on police lines, the RUC replied with plastic bullets and CS gas. Catholic taxi driver Michael McGoldrick was shot dead by the UVF near Lurgan that night.

As violence spread across Northern Ireland, the decision of the RUC to allow the main march to proceed to Drumcree on July 11th sparked widespread disturbances in nationalist areas.

Opening the meeting, the chairman ‘Mr Perry’ noted they met against a background of serious disorder across Northern Ireland in connection with marches “which had resulted in a fundamental change of attitudes towards the RUC across both communities”.

For his part, Derek Woods (the principal civil representative in Co Armagh) reported that support for Sinn Féin had clearly increased since Drumcree “with the party regaining any support lost as a result of the Manchester bombing [by the IRA in June]”.

‘Betrayed by the RUC’

Nationalists “felt betrayed by the RUC over their actions at Drumcree” and it was clear, he stressed, that recent events had helped IRA recruitment while tourism had already been affected.

In addition, “there was apprehension that terrorism would come back onto the streets and that the political talks would fail without a Sinn Féin presence”.

Woods stressed: “Drumcree was, quite simply, a disaster for both communities and their relationship with the police. They were now as far apart as ever. There was a total loss of confidence in the RUC and criticism of senior officers.”

He noted Fr Dooley, the parish priest of Drumcree, had said relations between the police and local nationalists were at an all-time low.

“There was a perception that the RUC had not been impartial in their dealings at Drumcree and there were some allegations of collusion in that a Catholic street had been attacked by a loyalist mob after four RUC Land Rovers had been withdrawn.”

The official revealed that the senior RUC divisional commander had admitted to Fr Dooley that this redeployment was “a mistake”.

At a political level, there was also a hardening of attitudes towards decommissioning, with the Sinn Féin position becoming “more favourable” within the nationalist community.

The committee considered serious civil disturbances in both loyalist and nationalist areas . The most serious clashes had been in the Bogside area of Derry, where a young Catholic had been killed. A further aspect of the trouble was the boycotting of Protestant businesses by Catholics in Tyrone and Fermanagh, followed by tit-for-tat action on Catholic businesses.

The attempted removal of the Ulster Unionist mayor of Derry Richard Dallas by the nationalist council “was a further indicator of community tension”.

The meeting heard details of polarisation across the region. It was reported in Newtownstewart, Co Tyrone, that 30 people had transferred their bank accounts because they had seen their bank manager at Drumcree.

In Castlederg, Co Tyrone, a diabetic woman had found her pharmacist blocking the road as she went to get her insulin supply. She subsequently changed her chemist.

The one glimmer of hope had been a unique series of meetings chaired by the SDLP leader John Hume between the Apprentice Boys of Derry and the Bogside Residents’ Group. Although the talks did not succeed, “they had been ground-breaking in themselves”.

In Belfast, it was reported that sectarian violence had increased at all the interfaces and 200 families had been forced to move out of the Torrens and Oldpark areas of north Belfast.

Summing up, the chairman noted that recent events had proved disastrous for the police, political development and community relations. Old attitudes had re-emerged which it had been hoped had been weakening. The following weekend in Derry, when the annual Apprentice Boys parade was due to be held, would be crucial and it was possible that “the RUC would be the long-time losers”.

The impact of recent events on the Policing Authority of Northern Ireland – the policing oversight body – was described by one of its members. “Certainly nationalist members were very unhappy although a vote of no confidence in the chief constable [Sir Hugh Annesley] had eventually been withdrawn.” It was expected that one member, Francis Rocks, would resign.