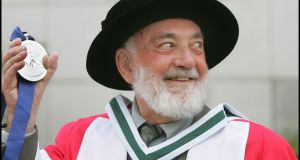 Poet Thomas Kinsella described the royalties he received for his work as “comic” and sent then taoiseach Charles Haughey a royalty statement for the princely sum of 4p, according to newly-released State papers.

Kinsella, who recently received the Bob Hughes Lifetime Achievement award at the An Post Irish Book Awards, was exercised by the conditions under which artists qualified as members of Aosdána for the Cnuas, the Arts Council stipend.

The Cnuas was introduced as an annual payment which is meant to supplement the earnings of artists and allow them to devote themselves full time to their work. In 1988 it was £3,000. Today it is €17,180.

Under the terms of the Cnuas, as it was 30 years ago, artists could only qualify for it if they had “no position or emolument . . . other than one concerned exclusively with the creative work”.

Kinsella said this was unfair on poets as none of them could live entirely off their art and all had to do “enabling work” to supplement their meagre earnings – in his case he was a teacher.

He added that royalties in the case of poets were usually so small that they could hardly be considered as income at all.

Newly declassified papers from the Department of the Taoiseach in 1988 include a royalty statement sent by Kinsella to Haughey.

It was for 4p for Kinsella’s contribution to the book The Pleasures of Gaelic Poetry edited by Séan Mac Réamoinn.

As a consequence Kinsella suggested that the “enabling work” of poets should be exempted when it came to consideration for the Cnuas.

He furthermore stated that since royalties were minimal when it came to qualifying for the artist’s tax exemption, the “enabling work” of poets should be considered instead.

His intervention generated a great deal of correspondence as evidenced in the State papers just released.

The then director of the Arts Council, Adrian Munnelly, said poets like composers had incomes from their work which were “depressingly low” but he was reluctant to suggest making exceptions for any line of artistic endeavour.

In July 1987, Haughey wrote back to Kinsella on similar lines suggesting that no exemption could be made for any line of artistic work even if one paid better than another.

He informed the poet that the Revenue Commissioners had vetoed the notion that “enabling work” could be subject to the artist’s exemption.

He also reminded Kinsella that membership of Aosdána was “primarily an honour and a mark of distinction” and suggested the poet was “eminently qualified” to join Aosdána if he so wished.

In 2001, Kinsella revealed to The Irish Times that he had been invited to join Aosdána after its inception “but decided not to be a part of it. It was a matter of standards. When I saw the membership, I thought I would be standing for higher standards out of it rather than in it”.

Kinsella turned 90 this year and was recently given an honorary doctorate by Trinity College Dublin (TCD) for his contribution to Irish literature. He has never been a member of Aosdána.