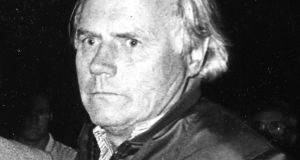 ‘Eksund’ captain Adrian Hopkins, claimed after his arrest that the arms on board the vessel “were actually loaded in Libya”.

An Irish diplomat who went to Tripoli in the wake of the discovery of a huge arsenal of Libyan arms destined for the IRA was met with claims that Ireland was being taken in by an “imperialist” conspiracy.

The Irish ambassador to Italy Robin Fogarty travelled to Libya on November 7th, 1987, for an appointment to meet the Libyan foreign minister. But he was left waiting at the airport in Tripoli for hours and was then told the minister was not available.

Conscious of Libyan involvement in the arms shipment, the government cancelled a trade mission to Libya which had been scheduled for later that month and which would have been led by then minister for industry and commerce Albert Reynolds.

On October 30th, 1987, the Eksund, a Panamanian-registered vessel, was boarded by French customs officials in Brest and its five Irish crew arrested. It was found to be carrying 150 tonnes of arms and ammunition.

In a report on the meeting, Fogarty wrote he mentioned the capture of the Eksund, the fact that some of the crew had close links with the IRA, and the speculation that the consignment had originated in Libya.

“The situation was such that I had been instructed by my government to travel to Tripoli as a matter of urgency to convey a message at a high level to the Libyan government. In view of the uncertainty surrounding this whole affair and the very strong reaction in the Irish parliament and amongst Irish public opinion, the Government considered it unwise to proceed with the [trade mission] at present.”

The officials said Libya was “very sorry” about the decision especially because Libya had no connection with the vessel.

“[The Libyan official] went on to say that the allegations about Libyan involvement, especially the United States and France, to put Libya into a bad position vis-a-vis Ireland, was part of a campaign by imperialist countries relating to terrorism generally.

“At this stage I told him that all the intelligence sources with which the Irish government had contact claimed to have certain knowledge that the consignment of the ship in question was loaded in Tripoli,” added Fogarty.

When the Libyan official suggested Ireland was coming under external pressure to say that, the ambassador pointed out that the government made its own decisions and there was serious concern abut the ongoing violent activities of the Provisional IRA.

Fogarty went on to note that the conversation took a bizarre turn with him being asked about minister for foreign affairs Brian Lenihan being prevented from entering Britain at Manchester.

The London Times had on the same day reported that Chirac had revealed he had received a “an extremely warm letter” from Margaret Thatcher congratulating France on the successful operation. The paragraph was highlighted by an Irish official and may have prompted the letter from the taoiseach.

Information that came to light in the wake of the seizure showed the trawler had been in Libya in October. Its captain, Dublin-man Adrian Hopkins, claimed after his arrest “the arms were actually loaded in Libya”.

London-based Irish diplomat Richard Ryan held a meeting with a senior British adviser in November that month who said Hopkins had claimed to have “been involved in several previous runs from Libya. The British are as near certain as possible at this stage that Libya are involved.”

By this time, Irish authorities had learned that there were probably earlier shipments of guns and ammunition in 1985 and 1986, containing Semtex explosives and surface-to-air missiles.