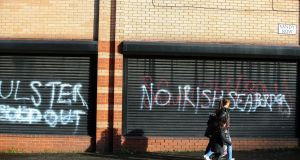 Irish Sea border criticised in graffiti on Sandy Row in Belfast: the sea border was introduced for trade between Northern Ireland and the rest of the UK due to Brexit. Photograph: Jonathan Porter/PressEye

Traditional Unionist Voice leader Jim Allister on Wednesday unveiled his plot for a mini-insurrection against the Northern Ireland protocol, albeit a peaceful “political” one.

He wants the DUP and Ulster Unionist Party to join him in seeking to disrupt the “evil genius” of the protocol by boycotting North-South bodies, by unionist Ministers vetoing any protocol legislation that crosses the table of the Northern Executive; and by DUP Minister for Agriculture Edwin Poots instructing his staff not to operate Irish Sea border checks at Northern Ireland’s ports.

Allister strongly played the line that the protocol was facilitating those with a united Ireland agenda.

Alliance deputy leader Stephen Farry, who engaged in debate with Allister on BBC Radio Ulster’s Nolan show on Tuesday, characterised the three-pronged protocol demolition proposal as about as welcome and useful as one of Baldrick’s “cunning plans” in BBC comedy Blackadder.

Allister and Farry replayed the classic Brexit rondo, with the TUV leader complaining that Leavers didn’t get the Brexit they voted for while the Alliance North Down MP wondered had Allister ever heard of the law of unintended consequences.

But it would be folly for the British and Irish governments and those northern politicians who want to maintain political and community stability in the midst of Brexit and the pandemic to ignore what Allister is tapping into.

And that was reinforced by comments from PSNI assistant chief constable Mark McEwan, who told the House of Commons Northern Ireland Affairs Committee on Wednesday that discontent was brewing in loyalist communities due to the protocol.

He suggested that if it wasn’t for Covid-19, there would be street protests. “We are starting to see graffiti,” he said. “We are picking up social media sentiment of a growing discontent, particularly within the Protestant/loyalist/unionist community.”

Hitherto, it seems, loyalists and many unionists saw the impact of the protocol in abstract terms. Flags and parades could fire emotions but what had the protocol to do with the daily reality of people’s lives? But now that some products are not getting into Northern Ireland from Britain, constitutional anxieties are being stirred.

First it was the pictures of some empty shelves in stores such as Tesco, Sainsbury’s and Asda; and then Marks & Spencer confirming it was withdrawing about 300 products from its northern outlets because the customs processes in shipping them across the Irish Sea were so complicated.

Then there was the prospect of extra VAT being incurred by people buying secondhand cars from Britain and companies importing steel into the North facing tariffs of 25 per cent.

No sooner were those two issues resolved than more problems arose. This week, the focus has been on garden centres experiencing bureaucratic hurdles bringing in plants and flowers from Britain.

Meanwhile, Amazon has said that, come April 1st, when the grace period for easing the flow of goods ends, it will stop sending some goods to Northern Ireland due to the red-tape obstacles that have arisen.

Some of the issues appear both daft and costly. Another problem that emerged this week was that Lough Neagh eel fishermen would no longer be able to sell their catch in Britain, which could cost them about £500,000 annually.

When you contact British government sources, they acknowledge the difficulties but insist they are being tackled. “Look at how steel and VAT on cars were solved,” they say.

But each hurdle – whether steel, cars, flowers, parcels or eels – has to be surmounted on an individual basis. It is taxing and draining.

The challenge, as London sources accept, is achieving some all-embracing agreement between the British government and the EU on a range of matters to make life easier for people in Northern Ireland and for people trying to sell goods there.

But that is what Brexit and the protocol have visited on the North. And each day there is a new complexity, and each day more people in the unionist and loyalist community get that little bit more alarmed about where it is all heading.

This gives people like Allister the opportunity to make mischief and arouse passions best left dormant. He has not developed any significant traction yet but he could do.

The complacent response from Northern Ireland Remainers and Leavers may be, “As you sow so shall you reap”.

But that would not be wise. Best for London, Belfast, Dublin and Brussels to cooperate in achieving general solutions rather than permitting the absence of Amazon parcels to become a flags-type rallying cry for unsettled loyalists and unionists.