Online retailer said to be preparing to delist more products 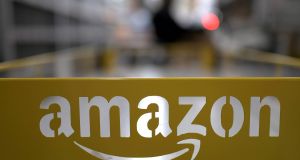 Amazon is reportedly concerned that excise duty will now have to be paid twice on shipments of alcohol which are sent from Britain across the Irish Sea to the North. Photograph: AFP via Getty

Amazon has halted sales of wines, beers and spirits in the North and is preparing to delist more products due to new Brexit customs rules, broadcaster ITV reported on Tuesday.

The online retailer is concerned that excise duty will now have to be paid twice on shipments of alcohol which are sent from Britain across the Irish Sea to Northern Ireland, ITV reported.

Britain left the European Union’s single market and customs union on December 31st, introducing paperwork and customs declarations for those businesses that import and export goods with the bloc.

In order to keep the Border in Ireland open, a separate agreement was struck that requires a regulatory border in the Irish Sea between Northern Ireland and the rest of the UK.

The British government said the overwhelming majority of parcels continued to move smoothly, and there was no reason for businesses not to send goods to Northern Ireland.

“These goods will not be taxed twice, and we will issue new guidance clarifying the position to ensure any remaining issues are addressed,” a British government spokesman said. – Reuters