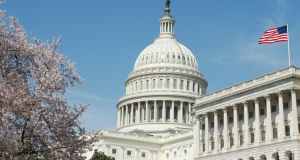 Any post-Brexit trade deal between Britain and the US must be approved by Congress. Photograph: Getty

Senior political figures in the United States have warned Britain not to renege on its commitments under the withdrawal agreement it signed with the European Union, warning that the Belfast Agreement must be protected.

In a statement on Tuesday night Richard Neal, chairman of the Ways and Means committee in Congress which oversees trade agreements, pointed out that the United States is a guarantor of the Belfast Agreement.

Noting that Britain and the European Union had approved a withdrawal agreement earlier this year that established the terms of the United Kingdom’s orderly exit from the EU, he said: “I urge both sides to uphold the terms of this joint agreement, particularly with respect to the treatment of Northern Ireland, in accordance with international law.”

“The UK’s departure from the EU at the end of this year and any US-UK trade agreement must preserve the Good Friday Agreement, which has maintained peace and prosperity for British and European peoples since 1998,” he added.

“I sincerely hope the British government upholds the rule of law and delivers on the commitments it made during Brexit negotiations, particularly in regard to the Irish border protocols.”

Britain wants to strike a bilateral trade deal with the United States as it leaves the European Union. But any deal must be approved by Congress, with the Ways and Means Committee exercising significant oversight over any future trade agreement.

Another member of the committee, Pennsylvania congressman Brendan Boyle, also warned that the Belfast Agreement must be preserved.

“Joe Biden is committed to preserving the hard-earned peace & stability in Northern Ireland,” he wrote on Twitter.

“As the UK and EU work out their relationship, any arrangements must protect the Good Friday Agreement and prevent the return of a hard border.”

While US president Donald Trump is strongly supportive of Brexit and is seen as an ally of British prime minister Boris Johnson, Mr Biden has a strong interest in Irish affairs, and is a committed internationalist who supports the European Union and Nato.

A report in the Daily Telegraph over the weekend, disclosed notes of a private meeting between Mr Trump and former prime minister Theresa May shortly after his inauguration as president, during which the US president asked about Northern Ireland in the context of Brexit.

“What about Northern Ireland?” Mr Trump asked. “There’s such hatred there. I just don’t understand where it comes from.”

Mr Biden, who visited Ireland in 2016 in his final months as vice president, regularly references his Irish roots and quoted Irish poet Seamus Heaney during his speech accepting his party’s nomination for president last month.

Several Irish-Americans are working on his campaign at a senior level.