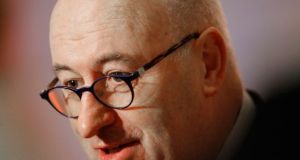 Tánaiste Leo Varadkar has rejected former European commissioner Phil Hogan’s claim of being subjected to a “full-scale attack” by the Taoiseach and himself over the so-called “Golfgate” affair.

In comments to the Kilkenny People reported on Tuesday, Mr Hogan insisted he had not “broken any law”, adding: “I didn’t get due process, unlike others. I am very disappointed that there was a huge effort concentrated on my resignation.”

Mr Varadkar, speaking on Wednesday, said he had not spoken to Mr Hogan since his resignation after controversy surrounding his attendance at the Oireachtas Golf Society dinner in Clifden, Co Galway and his movements around Ireland this summer.

“Ultimately, nobody in Government wanted to lose a Cabinet member or a Commissioner or anyone else and this all could have been avoided if those involved had obeyed our laws and followed the public health guidance and the rules and regulations,” Mr Varadkar told reporters at a Government press conference on Brexit.

The Tánaiste said the matter had become an issue of public controversy and anger “because people felt that those in high office and those that make the rules weren’t following them.”

Mr Hogan told the Kilkenny People he was left with “no option” but to resign because he was subjected to a “full-scale attack” by Taoiseach Micheál Martin and Mr Varadkar,

“I always feel like Irish people expect due process in the right forum. I didn’t get that. I wasn’t given that chance,” he said.

“The Government had a full-scale attack on my compliance or otherwise,” said Mr Hogan, adding that he was left with “no option but to resign because of the huge pressure” from Mr Martin, Mr Varadkar and the media.

“My life in public service after 38 years has come to an end. I am going to take some time out and reflect on what to do next,” he said, adding that he would continue to base himself in Brussels while he considered his future.