Brexit block: so many possible outcomes, so little time

Ten weeks left, the Commons is in chaos and the range of possibilities remains wide 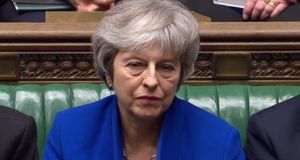 UK prime minister Theresa May listens during a debate on a motion of no confidence. Photograph: AFP/Getty Images

Ten weeks out from the date when Brexit is due to take place, the extraordinary thing is that the range of possible outcomes remains so wide. The massive defeat in the House of Commons of the proposed withdrawal agreement championed by UK prime minister Theresa May has plunged the whole process into fresh uncertainty. So how could it all work out?

The first thing to note is that if nothing is agreed, then the UK will leave the EU on March 29th in what is called a no-deal Brexit, when all trading and regulatory rules change overnight. It is clear that a majority in the House of Commons does not want this to happen – and neither does the EU. But something has to change for it to avoided.

So what might that be? Theresa May has said she will consult across the House of Commons and some senior parliamentarians are threatening to take matters into their own hands if she does not do so quickly. There could be a majority for a softer version of Brexit, with the Labour Party saying it wants to stay in the EU customs union – and many MPs favouring a relationship similar to Norway, which is in the European Economic Area and is a member of the single market. This would require the UK to drop some of the existing “red lines” it has held to.

A change in approach could be signalled in the political declaration – the document accompanying the withdrawal agreement that signals where the two sides want to go in future talks. Some special measures might still be required to guarantee no hard border in Ireland, though less than currently envisaged in the controversial backstop plan. The backstop would stay in the withdrawal agreement, in case future trade talks did not work out.

If parliament cannot agree on what kind of deal it wants, support could build for a second referendum. Some MPs on both sides already favour this route. How the ballot would be worded is open to question, but clearly a Remain win would lead the UK to revoke Article 50 and stay as an EU member.

There is also building speculation that, given how late things are running, Article 50 might be extended, meaning the UK would leave at a later date. However, an extension of Article 50 – unlike a revocation – must be agreed by all the 27 other EU member states. They are likely to want the UK to point a way forward before agreeing to this.

Finally, it is still possible that Theresa May will get the deal so roundly rejected this week through parliament, perhaps following some tweaks in the political declaration. However, given the scale of the defeat, this will be very difficult, with the hard Brexit lobby and the DUP demanding changes that Brussels will not sign up to.