Theresa May’s deputy tells the DUP: No border in the Irish Sea 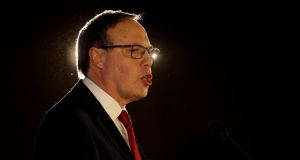 Theresa May’s de facto deputy flew into Belfast on Friday night to issue a message to the Democratic Unionist Party: There will be no border in the Irish Sea.

First secretary Damian Green, who is being investigated following allegations that extreme pornography was found on his office computer, got one of the biggest cheers of the night when he made the pledge at the La Mon Hotel to over 400 delegates, including DUP leader Arlene Foster.

North Antrim MP Ian Paisley said his party, which is propping up Ms May’s minority government, welcomed the commitment from both Mr Green and the prime minister.

“They have made that very clear, and the first secretary did that at our conference as well,” he told The Irish Times. “We want to make sure the Border is not moved to the Irish Sea, that is not acceptable ever and that would be a constitutional breach.”

There will be “significant” changes on the Border post-Brexit, Mr Paisley said.

“The flow of people and trade will be scrutinised, and people have got to waken up,” he said.

Deputy leader Nigel Dodds told the conference that if the EU insists on border check points on the island of Ireland “that is a matter for them”.

There will be no internal UK border in the Irish Sea,” he said.

Cutting Northern Ireland adrift from Britain “at the behest of Sinn Féin’s fantasy economics” would be an act of “economic vandalism”, MEP Diane Dodds said.

“We will leave the customs union and the single market alongside Great Britain,” she said, adding that failure to do so would jeopardise jobs and growth.

“It would hit household incomes. And it would risk leaving young people excluded and marginalised. This would be the biggest threat to the peace process,” she said.

She believes the issue of the Irish Border “remains thorny” saying a hard Border would be “politically unthinkable and economically catastrophic” for Northern Ireland.

“In the meantime the EU is using our circumstances to extract as much cash from the United Kingdom as possible. The same broken record - money, money and more money,” she said.