UK Politics: Brexit may turn out to be a mid-stage event in a longer meltdown of trust 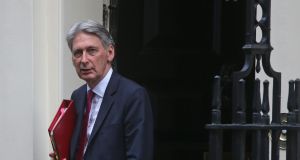 Britain’s chancellor of the exchequer Philip Hammond is resigned to higher levels of public debt than were thought conscionable not long ago. Photograph: Daniel Leal-Olivas/AFP/Getty Images

Theresa May did not offer hers after a botched general election of her own choosing but, if I were pressed for a word to capture British politics near the close of 2017, it would be “resignation”.

The political class is resigned to an exit from the EU that most of its members, including the prime minister herself, regard as foolish. Her internal critics are resigned to her survival, conceivably for another 18 months. Enemies of Philip Hammond want his resignation and, in one sense, they have it.

As of his budget last week, the chancellor is resigned to higher levels of public debt than were thought conscionable not long ago. He is less resigned to the years of slow growth forecast by the independent Office for Budget Responsibility.Even then, there is something pro forma about his determination to prove them wrong. A chancellor could hardly say anything else.

The question is whether the British people are resigned. Will they learn to live with several more years of (at best) slow improvement in their living standards? Are they more or less braced for the prospect, implicit in the OBR forecasts, of tax rises or cuts in services? If they are, public life will trundle along.

If not, then the implication is rather dark: Britain has not seen its angriest moment yet. The vote to leave the EU felt like the culmination of a near-decade of economic torpor since the financial crash. It might turn out to be something more like a mid-stage event in a longer meltdown of trust in the governing order.

The British do resignation well. They have managed down their place in the world for about a century without tipping into civil disorder or authoritarianism. If a comparably slow leakage of relative power is America’s fate in this century, it would do well to match Britain’s equanimity in the last.

It helped, however, that the citizens doing the resigning were used to much worse. For a generation that lived through world wars, postwar austerity was something to take in its stride. For the generation that knew postwar austerity, the stagflation of the 1970s was no great shock. Each successive group of voters had some perspective about household hardship and national decline that came from experience.

Today’s median citizen is unlikely to have quite the same pain threshold. How could they? Nor do they know from experience or even observation of comparable countries what happens when an angry population experiments with, say, nationalism or thoroughgoing socialism. That mix of sensitivity to economic distress and appetite for risk can prime a nation for a turn to ideology.

The human element, leadership, can drain the poison from a national mood. In retrospect, Britain had some artful leaders in the postwar period. No longer. It has a prime minister who was, as recently as the spring, complicit in some incendiary rhetoric about fellow citizens who had doubts about EU exit. Below her, it has several ministers who give the impression of having won a competition on the back of a cereal box to serve in cabinet.

They may yet be spared the gauntlet of guiding the country through a stretch of slow growth. The bluffer kind of Tory doubts the clairvoyance of the OBR, and of any forecasting body. A long pattern of confounded or revised predictions warrant these doubts.

The trouble is that forecasters can err through optimism, not just the opposite. The OBR does not, for example, predict a recession, because hardly anyone ever does. If one occurs, then Britain will go into it with high public debt and already low interest rates. Its means of softening the recession would be more limited than in 2008.

It is natural to consult the survey evidence, listen to the popular din of grievance and conclude that trust in public institutions has hit a hard floor. A recession in which the elites were impotent to help would test that proposition. So too would the OBR’s scenario of economic mediocrity short of recession.

If the OBR is right, one good might come of it. The fashion for dismissing growth as the vulgar concern of desiccated calculating machines will become hard to sustain. Thinking “beyond” gross domestic product used to be a trope of Anglican vicars with too much radio time and progressives who were too well screened from the economy to know better.

Now Conservative Eurosceptics do it: any slowdown caused by exit is excused by the heroic cause of national self-government. With the fatuity of people who will themselves always be fine, they use the visual metaphor of the Nike logo, with growth down for a while before soaring into the future. We will see how exhilarating voters find that ride. – Copyright The Financial Times Limited 2017