Kathy Sheridan: Why is British public so ignorant on Brexit?

British Prime Minister Theresa May is facing a backlash from Brexit supporters after reports that she is ready to pay a €50 billion Brexit divorce bill. Video:Reuters 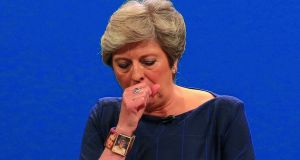 UK prime minister Theresa May: English frontline politicians and media have exposed their contempt and gross ignorance about Ireland and our shared history. Photograph: Peter Byrne/PA

Tom Holland, a 49-year-old Englishman – a Cambridge-educated classical historian – with tens of thousands of online followers, poses a question: “A stupid question, I’m sure, but why does the UK leaving the customs union mean there HAS to be customs posts on the Irish Border?”

Not stupid perhaps, though so straightforward it seemed more like a trap.

But then the straightforward replies started coming. Sharon O’Dea: “Because EU law requires that customs need to be checked at the EU border – else it’ll become a magnet for smugglers.”

Holland: “So it’s the EU insisting on it, not the Irish or the British?” O’Dea: “It’s just a logical consequence of no longer having a shared customs regime – not really a matter of ‘insisting’. It’s unavoidable.”

Tim O’Connor: “Because that is what a border between customs regimes is. Even the Norway/Sweden one has customs checks. And the time to listen to the warning about this – and we did warn – was last June . . . Imagine creating opportunities for dissidents to . . . fund themselves.”

A stupid question, I'm sure, but why does the UK leaving the customs union mean there HAS to be customs posts on the Irish border?

To most of us, these answers are depressingly obvious. Worse, we know they are only at base camp of a mountain of complexities. But of the 60-plus replies to Holland’s question, only a handful wagged fingers at his ignorance or took it less than seriously. “Not a stupid question you’re asking,” wrote Helen Joyce, expressing a wish that UK politicians would ask questions too. “It’s because under WTO rules, anything you offer one country you must offer all (except if you have a free trade agreement). So no customs with Republic of Ireland means you must let stuff in freely from everywhere.”

British journalists and commentators mutter about EU/Irish conspiracies, refer to Irish Border concerns as 'new', suggest this is all part of a strategic game to secure unification-by-consent

“Thank you,” replied Holland, “the answer to my question that I was waiting for!”

His inquiry it turned out, had been sincere. It was also brave. A high-profile professional prepared to expose his knowledge gaps by asking a simple question – and to listen respectfully to the replies? How rare is that? And how low our expectations bar has fallen.

By contrast, English politicians and media have recently not only exposed their contempt but also their ignorance about Ireland and our shared history. Associate editor of the Daily Telegraph: “Ireland has poisoned UK politics and brought down governments for centuries...” British Ukip MEP: “A tiny country that relies on UK for its existence. We should advise, we are free to revoke common travel area.” Kate Hoey, Labour MP: “If this ends with a no deal, we won’t be putting up the Border, they’ll have to pay for it because it doesn’t need to happen.” Lewis Moonie, Labour peer: “It’s their border as part of the EU. Why the hell shouldn’t they be expected to pay for it?”

British journalists and commentators mutter about EU/Irish conspiracies, refer to Irish Border concerns as “new”, suggest this is all part of a strategic game to secure unification-by-consent and wonder breathlessly if Dublin will “back down”. Back down to what? What precisely is “new” about Irish Border concerns? And where is the evidence that the Irish campaigned en masse for Brexit as part of this cunning reunification strategy?

Hoey tweets about her visit to a “smooth” Swiss/German/French border crossing, eyeing it as a model for “land border issues NI/ROI”. Some model. Not only was she posing in front of a very large customs post, she seemed unaware that Switzerland is in Schengen and the European Free Trade Association.

Her infantile suggestion that Ireland should pay for the Border implies a very particular obtuseness. It was the hard Brexiteers’ blatant lies and bluster that led directly to this juncture, whereby the “NI/ROI” Border automatically becomes the EU/UK border, one which Ireland is bound to enforce by treaties and also by an aversion to providing a back entrance to Europe for sub-standard, non-EU-compliant goods.

Meanwhile, the hard Brexiteers crash on with their Dambusters fantasy game; blast your way towards Empire 2.0 via the World Trade Organisation and never mind WTO rules about controls at border crossings. And the vital mission to keep the citizens in pig ignorance lurches on with the government’s refusal to publish 58 Brexit sectoral impact studies (rumoured to be the stuff of nightmares) , with the controversial bits excised, which – get this – may or may not exist.

Could they be this obtuse? Another theory presents itself. Take a good look at that overlap between the hard Brexiteers and the strutting billionaires who support them. If you simply walk away from the customs union and single market, change the regulations and abandon the Border problem to Ireland and the EU, by default you land the holy grail you’ve salivated over for decades: a no-deal Brexit.

You then watch gleefully as an ignorant citizenry lashes out at the EU, Ireland, anything with European in the title, academics, judges, banks and British industry bosses who “talked down” Brexit.