Officials say fewer than 12 trips planned because of government talks 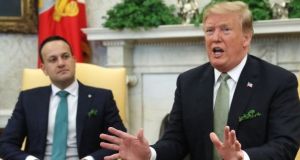 The annual St Patrick’s Day programme of travel for Government ministers is to be curtailed this year with fewer than 12 trips expected.

Sources have said that while health officials are monitoring the ongoing international coronavirus outbreak, the overarching reason for the curtailment is because of Government formation talks.

A decision is due to made next week on the exact itinerary for different ministers but priority will be given to the trips that are the most “politically and economically advantageous.”

The length of the trip will be shorter than last year, however, and officials are using the 2016 programme of events as a precedent.

At that time, former taoiseach Enda Kenny travelled to the US in a caretaker capacity and was repeatedly quizzed about the progress of Government formation talks at home.

Most embassies are usually told of the St Patrick’s Day travel plans in January but because of political instability, officials have been holding off on the slim chance that a new Government is formed.

After a meeting of the Oireachtas business committee on Wednesday, it was decided that there will be no second vote to elect a Taoiseach when the Dáil returns next week.

In light of this decision, the Department of Foreign Affairs will now move to finalise the slimmed down programme of events and will inform embassies in the coming days.

A source said that a Cabinet decision is not needed to approve the plans but it may feature in the next Cabinet meeting. Fewer than 12 trips are expected to go ahead, although final details are still being worked out.

Ministers will be told in the coming days what destinations they will be expected to travel to.