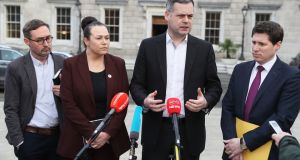 The Dáil’s next attempt to elect a taoiseach is unlikely to take place until the latter end of March following the announcement there will be no vote on the position when the Dáil reconvenes next week.

The decision to defer the second vote on nominations for taoiseach was taken by the Dáil business committee on Tuesday. It was due to take place on March 5th.

With a recess taking place around the St Patrick’s Day holidays, the next vote will not take place until after March 19th.

The decision was criticised by Sinn Féin finance spokesman Pearse Doherty, who said it was disappointing.

Saying he understood there would be no outcome from the second vote and further votes would be required, he nevertheless argued that such votes were an important stage in the process of government formation.

“Failure to have that to me will withdraw momentum from this process and allows people to sit back,” he said.

“We can’t sit back. There are real big issues that need to be dealt with.”

Mr Doherty was speaking along with colleagues from his party’s negotiating team – Louise O’Reilly, Eoin Ó Broin and Matt Carthy.

The party met with the Social Democrats and the six-member group of rural Independent TDs.

Mr Doherty said the party had not sought to re-engage with Fianna Fáil as yet, but left open the possibility that it would be considered. The thrust of his comments was directed at moving beyond a situation where certain parties were not amenable to talk to Sinn Féin.

“We need to explore any option, and every option, to bring forward a government for change. We need to inject urgency in this,” he said.

Asked specifically about whether there had been re-engagement with Fianna Fáil, Mr Doherty replied: “Not at this point. I think we know Micheál Martin is repeatedly making the point to yourselves and others in relation to that.

“I think it is very clear from our public utterances here that we are a party that is open to discussing [government] with all parties.”

Mr Doherty said that his party was not willing to revisit the drink-driving laws, which has been a big issue for the rural Independents.

He added that Sinn Féin did not want a second election. “I think that would be a major failure in relation to politics, and won’t be of our doing.

Meanwhile, the rural Independents group highlighted a series of concerns that it wants addressed if it is to support any of the parties in forming a government.

The Independents – Mattie McGrath, Michael Collins, Carol Nolan, Danny Healy-Rae and Richard O’Donoghue – met with the Fianna Fáil leader Micheál Martin on Wednesday morning before speaking to journalists at Leinster House. Michael Healy-Rae is also a member of the group.

The TDs laid out a series of concerns they said they had raised with Mr Martin.

Mr McGrath said the people of rural Ireland had been “forgotten about, neglected, abandoned and indeed blackguarded by successive governments”. The group were available to meet again with Fianna Fáil and with other parties, he said, adding they had already held a meeting with Sinn Féin.

All the TDs cited health and housing concerns, which affected rural Ireland in particular ways. Mr Collins raised the issue of Bantry Hospital, and was highly critical of the Road Traffic Act, which tightened drink-driving regulations. TDs said this legislation, introduced by the Minister for Transport Shane Ross, had “destroyed rural Ireland”.

Mr Collins said there needed to be senior minister for fisheries in future, and that farmers needed to be paid a better price for their beef by factories. Mr O’Donoghue said there had been “no infrastructure put in place” in rural Ireland by the last government.

Mr Healy-Rae said the hospital and health service in Kerry was a “total and absolute shambles”. He said there was a “massive shortage of sewerage schemes in Kerry”, instancing a number of towns and villages that did not have satisfactory sewerage arrangements.

This was the first thing he wanted to talk about with anyone who wanted to form a government. The “social fabric of rural Ireland has been blown to smithereens” by the drink-driving legislation introduced by Mr Ross, he added. “Every town and village is practically closed down in our county and I believe up the west as well,” he said.

Mr Collins said the drink-driving legislation has “shocking consequences” for rural Ireland. Businesses were closing because of it, he said. Mr O’Donoghue added there needed to be changes to the penalty points system.

Meanwhile, Ms Nolan said flooding was also an issue for the Independents, and said the Shannon should be dredged as a solution, which is “common sense”. Mr Healy-Rae said farmers would clean out their rivers “so that the water could flow freely”, but if they did so they would lose their single farm payment.

The group said they would work together on issues, but that members were free to vote whichever way they wanted in the Dáil. They said they could either be part of a government or support it from the outside. Mr McGrath said they could work with the Green Party if that group had a “common sense programme for government that didn’t have daft issues in it”.

No commitments on any issues were sought or given by Mr Martin today, the TDs said.