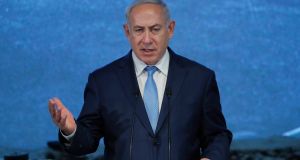 Irish Ambassador to Israel Alison Kelly has told officials in Jerusalem that the Government does not support an initiative to ban the sale of goods from West Bank settlements.

Ms Kelly was summoned to the foreign ministry on Wednesday for what was termed a “clarification”, even though the Seanad voted on Tuesday night to indefinitely postpone a vote on the private member’s Bill introduced by Senator Frances Black to criminalise the sale of settlement products.

It was stressed at the meeting that the Bill was a private initiative and did not have the backing of the Government.

The proposal, Ms Kelly said, was not part of the BDS (boycott, disinvestment, sanctions) campaign which the Government opposes.

Rodica Rodian-Gordon, the Israeli foreign ministry’s deputy director general for western Europe, underscored Israel’s opposition to the Bill and said any measure promoting a boycott of settlement products could be considered a BDS Bill.

Minister for Foreign Affairs Simon Coveney said the expansion of Israeli settlements on Palestinian territory was unjust, provocative and undermined the credibility of Israel’s commitment to a peaceful solution to the conflict.

But he stressed that issues of international trade fell under the common commercial policy of the EU.

“There are many countries around the world about which we have serious human rights concerns. We do not seek to prevent trade with those countries, except in very rare circumstances, in accordance with decisions at EU or UN level,” he said.

Tabling the Bill, Ms Black stressed that the aim was not a boycott of Israel or a ban on Israeli products, merely goods originating from illegal settlements.

“A ban on settlement goods is not a radical ask,” she said. “It is a disassociation from clear breaches of international humanitarian law and human rights abuses. It is a modest and tangible step we can take.”

However, she admitted that the economic impact of the measure would be negligible as the value of settlement imports to Ireland was estimated at only €1 million a year.

Just ahead of the Seanad debate, Israeli prime minister Binyamin Netanyahu issued a statement condemning the Bill. “The initiative gives backing to those who seek to boycott Israel and completely contravenes the guiding principles of free trade and justice,” he said.