TD claims midweek ‘rip off’ by hotels in demanding extra €70

Coveney says Minister will investigate issue for everyone, with ‘no special treatment’ for TDs 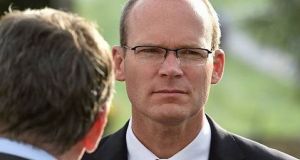 Simon Coveney: he said the Government had made it clear that with the lower Vat rate on hotel accommodation “we expect that the industry will pass that benefit on to customers and consumers”

A Fianna Fáil TD has demanded that the hotel sector be investigated for “ripping off” customers, including politicians at the taxpayers’ expense, after midweek prices rose by €70 when he attempted to get a room.

Roscommon-Galway TD Eugene Murphy said “last night was a rip-off night in Dublin city”. He said that on Wednesday night his usual hotel accommodation in the capital was booked out, and when he went to a number of other hotels “in every case the price had increased by €60 or €70”.

He was heading home, a distance of 150km, when eventually he got a room in a B&B on St Stephen’s Green.

“The taxpayer was ripped off because the taxpayer pays for our accommodation. That is not good enough,” he said, adding that this happened at a time when hotels had a reduced 9 per cent Vat rate.

Mr Murphy wanted the issue investigated and a “clear message sent to the hotel industry”.

He said he was told the reason for the increase was because of an upcoming conference. “That is not good enough, and it is no way to sell Ireland.”

Tánaiste Simon Coveney told him the Government had made it clear that with the lower Vat rate on hotel accommodation “we expect that the industry will pass that benefit on to customers and consumers”.

He said he would ask Minister of State for Tourism Brendan Griffin to talk to the Irish Hotels Federation about the issue.

Mr Coveney then stressed “for the record” that this was not just for Oireachtas members. “This goes for everyone. There is no special treatment for us in here, to be clear.”