Taoiseach warns Northern talks are on their ‘last chance’ 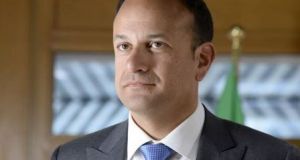 Leo Varadkar: he confirmed that if the talks failed the Government would seek the “implementation of the Good Friday agreement in the absence of those institutions”

Taoiseach Leo Varadkar has expressed grave concern that if the current talks on the North fail there will be no restoration of the Northern institutions for years.

Mr Varadkar told Opposition leaders and representatives in the Dáil that the discussions “are at a sensitive stage”. He wanted them to succeed.

However, he said: “I think this is the last chance for them to succeed. I am very concerned that if they do not succeed on this occasion we will not see the restoration of the institutions for many years.

“That is why I do not want to say too much. I would not wish to upset anyone or give anyone any reason to get upset.”

He confirmed that if the talks failed the Government would seek the “implementation of the Good Friday agreement in the absence of those institutions”.

He said it was “inexcusable that the Executive and institutions have not been restored”, and he held Sinn Féin and the DUP responsible for that.

“My genuine view is that it was a contrived collapse,” he said, adding that given the threat of Brexit it was essential the North’s institutions were restored to allow the anti-Brexit voices in the North to have a forum and as a conduit for reconciling conflicting positions.

However, t Sinn Féin’s John Brady rounded on Mr Martin, and said the Executive collapsed because of the controversy surrounding the renewable heat incentive scandal.

“Sinn Féin would not stand for that. On the other hand Fianna Fáil has been involved in many scandals. Maybe that is why it is taking this stand.