Facebook will not extend ban to all ads relating to referendum

Social media giant will not follow Google’s lead with wider ban; Twitter says it has not seen any attempts to manipulate platform for purposes of referendum 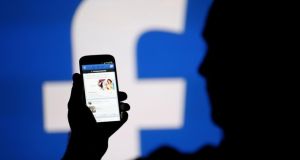 Facebook: The social media giant banned all foreign-financed and sourced ads relating to the referendum on Tuesday. Photograph: Reuters/Dado Ruvic

Facebook has said that it does not intend to follow the lead of Google and ban all ads relating to the abortion referendum.

Responding to questions from The Irish Times yesterday, a Facebook spokesman said “at the moment Facebook is not considering extending the ban on foreign ads”.

The social media giant banned all foreign-financed and sourced ads relating to the referendum on Tuesday, but Google instituted a much wider ban on Wednesday.

Google’s move, which the tech company said was prompted by concerns over electoral integrity, but which it did not elaborate on, was welcomed by campaigners for a Yes vote, but sharply criticised by the No side.

As questions about social media and online campaigning moved centre stage in the referendum debate, Twitter said that it has not seen any evidence of attempts to manipulate the platform for the purposes of the referendum.

“We are vigilant when there is any major event globally, whether it is the World Cup, the Oscars, or a referendum,” Twitter Ireland managing director Sinead McSweeney said.

“There are always measures in place to monitor Twitter traffic but also follower patterns around any event. We have looked at and reviewed the activity here in Ireland on numerous occasions in the last few weeks, and we have not seen any evidence of concerted spam activity directed towards the referendum.”

Twitter Ireland has not accepted any advertising relating to either side of the campaign because it does not accept advertisements on abortion advocacy or services.

That has left the platform outside the recent controversy on rising online ad spend that led to Facebook and Google both tightening restrictions on referendum ads.

Twitter does not have a dedicated reporting system for flagging bot accounts, but such accounts would sometimes fall under its spam category.

“Spam has always been a particular challenge for Twitter,” Ms McSweeney said. “We have dedicated teams who work on this 24/7, but... they need to constantly change their tactics because the tactics of those who seek to introduce spam to the platform in whatever form will change.”

She rejected the idea that the company was complacent. “We don’t rest on our laurels there because we know that malicious automation or efforts to impact whether it’s trending topics or the nature and quality of conversation on Twitter are all things that are against our rules but which people try. So we have to keep upskilling and fine-tuning our tools.”

Meanwhile, Together For Yes, the main umbrella group campaigning for a Yes vote, has said its crowdfunding initiative was shut down on Wednesday after the company hosting the website was attacked by an unknown Irish-based entity.

The organisation said the incident took place at 5.45pm which, it says, is a peak time for donations.

In a statement ,Together For Yes said the company which hosts the crowdfund webpage, Causevox, confirmed it had experienced an attack from within Ireland. The group has made a complaint to the Garda.

Causevox also hosts crowdfund webpages for Amnesty and Terminations For Medical Reasons. Amnesty Ireland has also stated that its crowd funding website was affected on Wednesday evening, at the same time.