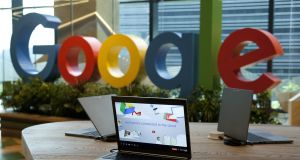 Google said its decision was part of its “election integrity” efforts but declined to elaborate or to explain the decision further. Photograph: Ore Huiying/Bloomberg

Google’s decision to ban all ads related to the abortion referendum has been welcomed by repeal campaigners but sharply criticised by the No campaign, which called the move “scandalous” and “an attempt to rig the referendum”.

Google’s surprise move to ban all ads comes a day after Facebook said it would ban all online ads about the referendum from foreign sources. The Google decision goes much further, and deprives anti-abortion campaigners of a key element of their strategy for the final two weeks of the campaign.

Google said its decision was part of its “election integrity” efforts but declined to elaborate or to explain the decision further.

Facebook declined to supply any further information in reply to a series of questions from The Irish Times about its decision.

The Together for Yes group, the umbrella group campaigning for a Yes vote in the referendum, confirmed that it maintained regular contact with Facebook and Google regarding online ads, sometimes complaining that anti-abortion ads breached the companies’ standards. A spokeswoman said that the contact was “at most once or twice a week”.

Several sources familiar with the internet companies said they believed that Google and Facebook had become alarmed in recent days at the prospect of the referendum being defeated and that they would be blamed by Yes campaigners and some elements of the media for their failure to adequately control or regulate advertising from the No side.

Facebook and Google declined to comment on the suggestion. Opinion polls continue to show a strong lead for the Yes side, though that lead has slipped since the start of the campaign.

Observers and campaigners have noticed a significant increase in ads from the No side in the past week, and No campaign sources have confirmed to The Irish Times that their plans included a substantial intensification of online advertising and campaigning in the final weeks of the campaign, culminating in a bid to target undecided voters in the final three days of the campaign.

However, that strategy is now undermined by the Google and Facebook decisions. It is understood that the Save the Eighth campaign had booked €40,000 of ads with Google in recent days, which will now be cancelled.

Google declined to supply any information about cancelled ads or the spending on ads in recent weeks.

A statement from all three campaign groups for a No vote rejected Google’s explanation that the move was about “concerns about the integrity of elections”.

“It is about concerns the No side will win. It is very clear that the Government, much of the establishment media and corporate Ireland have determined that anything that needs to secure a Yes vote must be done. Online was the only platform available to the No campaign to speak to voters directly. That platform is now being undermined, in order to prevent the public from hearing the message of one side,” the statement said.

Together For Yes director Ailbhe Smyth said the Google move “creates a level playing field between all sides . . . who can now seek to convince the Irish electorate by the strength of their argument and power of personal testimony, not by the depth of their pockets.

“We believe this referendum will be won on facts, and now when undecided voters are searching online, they’ll see the most relevant answers to their questions – not the ones that are paid to be put in front of them,” she said.

The Fianna Fáil leader, Micheál Martin, also welcomed the move in a speech to a Yes campaign event last night.