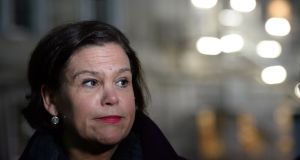 Mary Lou McDonald acknowledged there was an “issue to be addressed” following a number of resignations. Photograph: Dara Mac Donaill

The decision by Sinn Féin leadership frontrunner Mary Lou McDonald to examine how the party is run follows high-profile resignations amid allegations of bullying.

Those allegations have been strenuously denied by party president Gerry Adams and others, but they have undoubtedly damaged Sinn Féin following a successful local election in 2014 and general election last year.

Party sources are adamant that much of what is happening is the cut and thrust of politics in a party that is rapidly gaining electoral ground.

They point to rows and personality clashes in the other parties, most notably Fine Gael and Fianna Fáil, and the occasional ruthless intervention by party headquarters.

“I accept matters could be handled better, and there was bad behaviour on the part of some people, but at the end of the day some of it is personality clashes and just simply thwarted political ambition,’’ said a Sinn Féin source.

Those who have made bullying allegations insist otherwise and Ms McDonald acknowledged on Sunday there was an “issue to be addressed” following a number of resignations – but she strongly rejected suggestions there was a “culture of bullying” in the party.

The first public rumblings of discontent came in advance of last year’s general election when outgoing Cork East TD Sandra McLellan said she would not run again. She claimed she had been consistently and persistently undermined by a small number of constituency activists.

Midleton town councillor Pat Buckley won a seat for the party in the subsequent election.

But perhaps more damaging to the party’s image has been the high-profile resignations of councillors elected in 2014.

They were a new breed for the party, young potential general election candidates in some cases and very much on message.

A number of them contacted by The Irish Times, in the aftermath of the elections, pledged full loyalty to party headquarters and accepted Gerry Adams’s claim he had never been a member of the IRA.

Typical of that intake of young blood was Limerick councillor Lisa Marie Sheehy (25) from Kilfinane, who resigned from the party in September after claiming she was subjected to “toxic’’ bullying.

She was elected to Limerick City and County Council in 2014 on the first count in the Cappamore-Kilmallock Municipal Area and was seen as a rising local star in the party.

“I was bullied, and I’m not going to bend over for bullies,’’ she said.

Her Limerick party colleague, Cllr Ciara McMahon, said she was proud of the stance taken by Sheehy.

Sinn Féin said her allegations had been investigated and no evidence was found to prove them.

Nenagh-based Tipperary councillor Seamus Morris, a candidate in the last general election, said he had been expelled by the local organisation for “uncomradely behaviour’’, which was followed by a “dirty tricks’’ campaign.

An investigation by party headquarters, which included a five-hour interview with two officials, failed to find any substance to his allegations.

Morris said the controversy had badly affected his mental health.

Westmeath councillor Paul Hogan, who polled an impressive 5,270 first preferences in Longford-Westmeath in the general election, claimed he had been the victim of “vile allegations’’ by some party members in the aftermath of a relationship breakdown.

While he claimed he had been “bullied, intimidated and threatened’’, the party said Hogan had been exonerated after an independent investigation.

The party further claimed it had done its best to heal a local rift.

Kildare councillor Sorcha O’Neill resigned from the party, claiming to be a victim of “hostility, bullying and aggression’’.

In Cavan, Eugene Greenan, a councillor and member of the party’s ardchomhairle, resigned from Sinn Féin and politics in the summer.

He, too, alleged a culture of bullying, which was denied by the party.

Ó Clochartaigh, a former general election candidate, claimed there had been inaction on his complaints about disciplinary matters.

The party insisted Ó Clochartaigh’s resignation was motivated by the fear he would not win the party’s Galway West general selection convention which, subsequently, chose Galway city-based councillor Mairéad Farrell.