Tánaiste and Minister for Foreign Affairs Simon Coveney has said that Ireland's position on the border has not changed and that we cannot be expected to take a 'leap in the dark' and move onto phase two of Brexit negotiations. Video: Bryan O'Brien 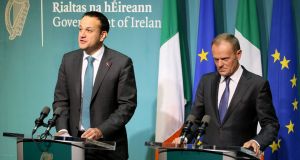 The President of the European Council Donald Tusk has weighed his support firmly behind Ireland in the Brexit negotiations, saying if the United Kingdom’s offer on the Border “is unacceptable to Ireland it will be unacceptable to the EU”.

Mr Tusk met Taoiseach Leo Varadkar in Dublin on Friday ahead of next Monday’s deadline for British prime minister Theresa May to submit her Government’s final offer for the three issues in phase one of Brexit negotiations.

In a brief media appearance with Mr Varadkar after the meeting, Mr Tusk offered support for Ireland that was much more robust than anticipated.

In effect, he said that the EU would give Ireland the right to effectively vet any offer on the Border that is being offered by Mrs May.

“We agreed today that before proposing guidelines on transition and future relations I will consult the Taoiseach on [whether or not] the UK offer is sufficient for the Irish Government.

He said that such a strong position might be hard for British politicians to understand but the fact was that Ireland remained an EU member while the UK was leaving.

Speaking at an event in Dublin earlier, the Tánaiste Simon Coveney said a deal could be reached on securing assurances from London on the Border post-Brexit but more work was required over the coming days.

“I think it is doable but I think there is need for some movement and more flexibility than we have seen to date,” he told reporters.

The newly appointed Tánaiste said that Brexit negotiations could not move on to second-phase discussions on the future EU-UK relations without assurances on the future of the Border and “a more creditable understanding of the parameters within which we are going to solve the Border issues in phase two.”

“That is all we are asking for and that is why we raised issues like the need to avoid regulatory divergence between the two jurisdictions on the island if we are going to have north-south cooperation that functions in the future,” he told the media after speaking in a public interview at an event hosted by Facebook.

The Dublin and London governments have been looking at “wording and drafting,” he said, and working with EU negotiators “to try and find wording that can move this forward.”

Negotiators were “pretty close to getting substantial progress” on two of three key issues to be determined in first-phase negotiations - the so-called Brexit divorce bill to be paid by the British and the rights of UK citizens in the EU and EU citizens in the UK post-Brexit - but that the Border issue remained unresolved.

“On two of those it looks like we are going to get the job done in the next week but on Ireland there is still work to do,” he said.

“We will be insistent on there being no fudge here that we get something real and something credible.”

The Government is seeking clarity from the British on how to avoid a hard Border after London quits the EU’s single market and customs union while the Republic of Ireland remains in both as part of the EU.

Mr Coveney said that while the Government “won’t have all the answers” by the critical summit of EU leaders on December 14th and 15th that will determine whether negotiations can proceed to phase two, he was hopeful that they can agree on “parameters” to resolve those issues in the second phase.

Asked whether the Government would “veto” negotiations if no progress was made by the time British prime minister meets European Commission President Jean Claude Juncker on Monday, Mr Coveney said there would be no need for a veto because the other 26 EU states supported Ireland’s position.

“We don’t want Ireland to be the problem here but at the same time we don’t want to move on to phase two and avoid the hard questions that do need more credible answers than we have today,” he said.

On the Democratic Unionist Party’s claims that the Government was seeking to set Northern Ireland apart from the UK, Mr Coveney said that he was not going to be drawn into responding to their comments.

“We agree far more than we disagree on,” he said.

The Government was listening to both unionists and nationalists on their concerns about Brexit but “at the same time we can’t allow one party to dictate what’s acceptable and what’s not,” he said.

“Our approach here is to listen to everybody. No one party has a monopoly in Northern Ireland in the context of what’s acceptable and what’s not,” he said.

During the Facebook event, Mr Coveney said that it was unfortunate that some had decided to draw “red lines” along “identity-based politics” and that the Brexit debate in Northern Ireland had become “a green versus orange issue.” The Government was trying avoid that and devise solutions to maintain the status quo.

“There will of course be politics and grandstanding from some people,” he said.

Mr Coveney brushed off a question about whether UK foreign secretary Boris Johnson and some Brexiteers should be asked to draw a line on a map to indicate where they think the Irish borders. This was a reference to a Channel Four news report where members of the British public were asked to do this.

The Tánaiste joked that he had seen “some smart individual” share a map on social media to educate British people that the key Border in Ireland was around Cork, his home constituency.

Talks between the British government and the European Union, with the heavy involvement of Irish officials, are entering a critical stage in Brussels.

Mr Coveney said there had been “pretty intense discussions” in Brussels yesterday over the wording of a possible offer from London “but we are not there yet.”

The minister said the he was not looking for a written commitment from the British that Northern Ireland remain in the customs union but a new, tailored customs arrangement was possible.

Meanwhile the DUP was sufficiently alarmed by the prospect of UK concessions on the Border to warn the British prime minister that any concession which affected Northern Ireland’s relationship with the rest of the UK risked the party’s support for Mrs May’s minority government.

On Friday Mr Coveney told BBC radio’s Today programme the Government’s position has not changed in months in seeking a written agreement to avoid a hard Border on the island of Ireland.

“We don’t like, but we respect the fact the Britain has decided to leave the EU.”

Mr Coveney said the British position seemed to be “we’ll solve this problem, but not just now” which was why the separate phases of the discussions were important. “We can’t be asked to leap into the dark.”

The Tánaiste said he did not see how leaving the Customs Union could work without a Border.

Mr Coveney has said if the British were unable to supply satisfactory assurances on the future of the Border, “then this process will have to be delayed”.

However, former Northern Ireland first minister Lord Trimble told Mr Coveney he should “go back and rethink what he’s saying”.

“We are going to leave the EU and one of the reasons for leaving it is to have our own say no what the regulatory framework for British industry is to be,” the Conservative peer told the Today programme.

“He is saying we should continue to be bound in all circumstances by the EU regulatory framework. What would then be the point of leaving?” Lord Trimble said he backed a UK Government proposal to avoid the need for Border checks by exempting smaller companies from tariffs when moving goods between Northern Ireland and the Republic. The Republic should ask Brussels to change EU law to relieve it of “the obligation to put infrastructure on the Irish side of the Border”, he said.

In a further development, Westminster’s Brexit committee said it could not see how Britain’s commitment to keeping the Border open could be reconciled with its policy of leaving the customs union.

DUP leader Arlene Foster said she had made it clear to the British government there could be “no arrangements agreed that compromise the integrity of the UK single market and place barriers, real or perceived, to the free movement of goods, services and capital between Northern Ireland and the rest of the United Kingdom”.

DUP MP Sammy Wilson said he was seeking clarification from the British government on reports that Ms May was preparing to make concessions to the EU on the Border.

“If there is any hint that in order to placate Dublin and the EU they’re prepared to have Northern Ireland treated differently than the rest of the UK then they can’t rely on our vote,” he said.

“They have to recognise that if this is about treating Northern Ireland differently or leaving us half in the EU, dragging along behind regulations which change in Dublin, it’s not on,” Mr Wilson added.

The fears in the DUP were being interpreted in political circles as evidence that a British move was becoming more likely.