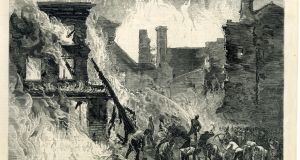 At William Smith’s inquest, his father, James, spoke to confirm he was a labourer, unmarried and 21 years old when he died.

That was on Tuesday evening. The previous Friday, William met his neighbour John McGrane at the corner of Bow Street in Dublin’s north inner city. Word was quickly spreading of a huge fire engulfing the Liberties. It was 10pm on June 18th, 1875, and the two young men decided to cross the city to take a look.

Earlier, at 4.45pm, Malone’s malt house and a bonded storehouse on Chamber Street, where some 5,000 barrels of whiskey and other spirits were being stored, were checked and all was in order. At 8pm, the alarm was raised, according to a report in The Irish Times.

The fire spread quickly. As the flames reached the wooden casks holding the liquor, they burst open, sending a burning river of whiskey flowing through the streets. By the time William and John set out for the blaze, the flow measured 2ft wide, 6 inches deep and stretched more than 400m down one side of Mill Street.

Livestock was common in the city at the time and the squeals of fleeing pigs added to the chaos as the tenements rapidly emptied of residents. Amid the “frightening” bustle, crowds gathered along the stream of alcohol; for many, the inferno presented a rare opportunity.

“It is stated that caps, porringers, and other vessels were in great requisition to scoop up the liquor as it flowed from the burning premises, and disgusting as it may seem, some fellows were observed to take off their boots and use them as drinking cups,” reported The Irish Times on June 21st.

“What was the result? Eight men were carried in a comatose state to Meath Hospital; twelve to Jervis Street Hospital; three to Stevens’ Hospital; and one young man to Mercer’s Hospital. And even these numbers do not represent the entire of the persons put hors de combat by the drink.”

In all, 13 people are understood to have died as a result of the fire. None of the deceased perished in the flames, nor did they die of smoke inhalation - each succumbed to alcohol poisoning from drinking “freely of the derelict whiskey”.

Among them was Mr Smith.

Mr McGrane described how William drank from the flow near the Coombe, “scooping it up with his cupped hands. He drank a great deal. What I drank was out of a jug. Nearly everyone was drinking it”.

“(The) deceased suddenly fell down, and became insensible. Two men, strangers, helped me to bring (William) part of the way home as far as Meath Street. We then met some other men, neighbours, who helped to bring him the rest of the way.”

William arrived home shortly before midnight and was brought to Richmond Hospital the next morning in a state of “profound coma”. He improved slightly under treatment, even regaining consciousness at one point, but died on Sunday night as a result of alcohol poisoning.

Some of those hospitalised in the aftermath had better fortune: “In the other cases the patients were treated in the usual way and having recovered were discharged on Saturday morning, perhaps sadder and, it is to be hoped, wiser men,” says the report.

Hundreds of police officers, soldiers and firefighters, led by the first chief of Dublin Fire Brigade, Capt James Robert Ingram, attended the scene within 15 minutes of the alarm being raised. They were later commended for their bravery in quelling the fire and moving residents out of harm’s way.

However, the damage to the Liberties was extensive. Of the 5,000 barrels of liquor, 61 were recovered, and some went missing under suspicious circumstances: “Three casks were rolled into the Coombe, and the result was that six men were arrested in a beastly state of intoxication, several more being conveyed to hospital.”

Tightly-packed tenement buildings on Mill Street, Ardee Street, Chamber Street and Cork Street were destroyed, along with nearby businesses, displacing many families. Members of Ingram’s brigade were deployed to prevent people trying to re-enter the charred ruins to seek shelter.

A number of pigs were destroyed, while The Irish Times also reported “a case of canine suicide” in the aftermath of the fire. On Tuesday night, a dog ran through the open door of the home of William Eyre on Dominick Street Upper. The animal was “foaming at the mouth and evidently either rabid or suffering from delirium tremens,” at the hands of the lapped-up whiskey.

The dog dashed madly about the house, knocking over furniture and attacking the homeowner. When Mr Eyre fended the dog off using an iron bar, the animal ran upstairs, jumped from a top floor window and “terminated its existence in the road below”.

At a meeting in the Mansion House the following Monday, lord mayor Peter Paul McSwiney, said it was “amazing” the death toll wasn’t higher.

“The time given for escape in some places during the progress of the fire was so short, I was apprehensive that some people should be left in danger in the garrets and cellars of the district. But on inquiry I was happy to learn that no life was lost during the great conflagration.”

The “unhappy” overdose deaths would probably have happened in “any city where there was a tendency to indulge immoderately in drink,” he said.

“In the present case the unfortunate victims apparently could not restrain themselves, as I understand, from the burning fluid.”

The above story is part of the ‘Lost Leads’ series - a re-visiting of lesser-known stories that have made the pages of The Irish Times since 1859. What can you find? Let us know @irishtimes. For more information on subscribing to the archive,click here.