The ship formerly known as Boaty McBoatface is launched 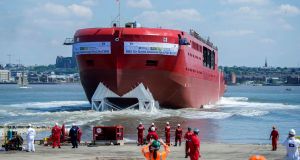 David Attenborough has said he was “extraordinarily emotional” as he launched the hull of a polar research ship named after him into the water for the first time.

The 92-year-old broadcaster said the ship, which the public voted to call Boaty McBoatface but which was officially named the RRS Sir David Attenborough, could be key to the preservation of the planet as it was launched into the river Mersey from the Cammell Laird shipyard in Birkenhead.

Asked how he felt when he saw the ship enter the water, Attenborough said: “It was an extraordinarily emotional moment. I’m surprised myself really.

“I’ve never seen a ship of that size get down a slipway and there was something very noble about it and very emotional. Irresistible.

“And to think that it’s going to go to the other end of the globe and do such valuable work and carry so many people from this country who will be working to find out all they can about the working of our planet is a marvellous thought.

“I am more honoured than I can say that that wonderful hull has got my name on it.”

The vessel, the largest civilian ship to be built in the UK for 30 years, is the most technically advanced survey ship ever built and will accommodate 60 scientists on research trips to Antarctica when completed.

Attenborough said: “The perils facing this planet are far, far greater than they have ever been in its entire history, or at least since the end of the dinosaurs, certainly for the last few million years.

“There’s nothing to compare with the perils we are facing, not only in the scale but in the speed at which they are happening and of course we now know that we are responsible for a lot of these changes that are taking place.

“You have to know what they are before you know how you can fix them so this ship is going to be key to the future salvage of our plant, or at least its preservation.”

More than 124,000 people voted to name the vessel Boaty McBoatface in a public poll, but that name was vetoed and it was instead named after the broadcaster.

However, Boaty lives on, in the form of a miniature, unmanned, yellow submarine on board the boat, which will be operated by the British Antarctic Survey (BAS).

Attenborough and Prof Jane Francis, director of BAS, pressed the button to launch the vessel into the water in front of more than 2,000 shipyard workers, scientists, engineers and special guests.

The ship was blessed by bishop of Birkenhead Keith Sinclair before its launch and a field gun was fired by soldiers from the Royal Artillery 103rd Regiment as it entered the Mersey.

Once in the water, tugboats pulled the ship into the wet basin, where construction work will continue. – PA

1 Coronavirus: Close contact numbers fall in sign restrictions may be working
2 Sinn Féin’s stand on Covid is facing increasing questions from political rivals
3 Love in a time of Covid: John and Mary marry over 40 years after first meeting
4 Cab investigates behind the massive gates of Chosen Few Motorcycle Club in Dublin
5 Two hundred Irish retailers for all your online Christmas shopping
Real news has value SUBSCRIBE