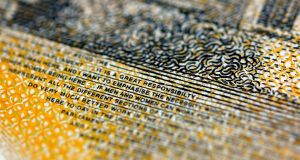 Some 46 million of Australia’s new $50 notes have been printed with a typo, the Reserve Bank has confirmed.

The “new and improved” $50 banknote was rolled out in October last year, with a host of new technologies designed to improve accessibility and prevent counterfeiting.

But the yellow note also contains a typo that misspells the word “responsibility”.

The note features the Indigenous writer and inventor David Unaipon on one side, and Edith Cowan, Australia’s first female member of parliament, on the other – as it has since 1995.

The RBA has printed “micro-text” on the note with excerpts of Unaipon’s book, Legendary Tales of the Australian Aborigines, and Cowan’s first speech to parliament.

The small error occurred on Cowan’s side, in the text of her speech.

“It is a great responsibilty [SIC]to be the only woman here, and I want to emphasise the necessity which exists for other women being here,” it says.

On Thursday, an RBA spokeswoman said the bank was “aware of it and the spelling will be corrected at the next print run”.

Australia was the first country to use polymer banknotes, which were invented by the CSIRO and introduced in 1988. Compared with paper notes, polymer has increased durability and security and makes it easier to include features to help those who are vision-impaired.

The new $50 introduced a tactile feature of four raised bumps on the banknote to help people identify it. All Australian notes are different sizes and colours for similar reasons.

According to the RBA, the $50 note is the most widely circulated banknote.

Updated $5 and $10 notes have already been released, and a new $20 is scheduled for October this year. –Guardian Service