Leo Varadkar joins in rendition of Zombie on streets of Limerick

Taoiseach tells busker after duet: ‘You’re really good, and I don’t do bullshit’ 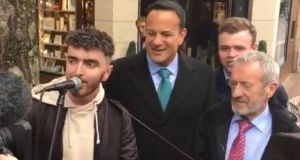 The Taoiseach is a well-known Kylie Minogue fan but on Thursday he paid tribute to Limerick’s singing legend Dolores O’Riordan by joining in a rendition of Zombie on the streets of the Treaty City.

Leo Varadkar may have been rocked by protestors in Cork on Wednesday evening, but he rolled into Limerick with Fine Gael colleagues in party mood.

Stopping on an election canvass on Cruises Street, Mr Varadkar joined 21-year old busker James McKelvey in a rendition of The Cranberries rock anthem: “In your hea-ad, in your hea-ad, zombie, zombie...”

They were accompanied by a Fine Gael backing group that included MEP Sean Kelly and Senators Kieran O’Donnell and Maria Byrne - in a photo-bombing line-up that brought back memories of Fianna Fáil’s “zombie doughnut” episode at that party’s ard fheis a decade ago.

Mr Varadkar said Fine Gael election hopefuls were “getting a much better response than they we had five years ago” on the doorsteps.

He added: “I’m confident that we will hold our four seats in the European Parliament, and maybe challenge for some gains, and I think we’ll have gains at Council level as well.”

McKelvey, from Shinrone, Co Offaly, said he was delighted with the Taoiseach’s impromptu musical collaboration.

“He’s a very nice guy. It was amazing, absolutely amazing.”

The young musician was performing alone for two hours on the street when he caught the eye of the Taoiseach, who took little persuading in joining in.

“I wasn’t expecting that. It was brilliant,” McKelvey said.

The Taoiseach reciprocated his support, dropping a few coins into the busker’s guitar case.

“You’re really good, and I don’t do bullshit, so I mean it,” Mr Varadkar told McKelvey.