Traditional craft, built in 1882, to be restored in Galway 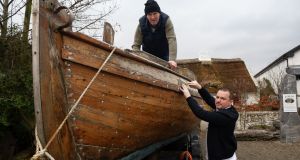 A 136-year-old wooden workboat dating from when writer James Joyce was born is due to be restored in Galway as part of a city community training project.

The 8m-long gleoiteog, or small Galway hooker, named Lovely Anne was constructed by the well-known boatwright Patrick Brannelly in 1882. He also built two famous Galway hookers, An Tonaí and the Morning Star, before he died in an accident in his early 30s.

Coincidentally, his great grandson Ross Forde is one of the trainees with Bádoirí an Cladaig, based on Galway’s Claddagh, who will work on the Lovely Anne’s restoration.

The Lovely Anne was built as part of Galway’s hooker fleet – the smaller gleoiteog taking its name from the Irish word gleoite, meaning pretty .

As Galway hooker historian Richard J Scott has recorded, it was the “maid of all work” used for fishing, small cargo work and short passages.

It plied Atlantic waters during two world wars, an independence struggle and civil war, and after some time off water it was restored by Colm Breathnach at Camus. It was sold to Jim Parkinson of Killybegs, Co Donegal, who fished it for a number of years, and has now donated it to Bádoirí an Cladaig,

The group is working with Port of Galway Sea Scouts, various sailing clubs in Galway city and county, and the wider Claddagh community on restoring traditional vessels, and this is the eighth, according to Ciarán Oliver of Galway Bay Boat Tours.

“We hope to have a fleet of 14 traditional craft in time for Galway 2020 European city of culture,” Mr Oliver said.

Bádoirí an Cladaig has endeavoured to extend its skills to non-sailing / fishing families through courses run with the Galway Roscommon Education and Training Board, and also held its inaugural festival in 2017. Some 20 adults have already participated in courses.

“We want to share this family history of boatbuilding on the Claddagh, and reconnect people to boats and sailing as a way of life,” Mr Oliver said. “Unfortunately, a lot of our children don’t know anything about Galway’s past, and particularly how the sea fundamentally shaped the development of the city. So, it is a dream of ours that every child living in Galway city and county have the right and the opportunity to learn how to sail.”

Mr Oliver’s 14-year-old son, Seán, was one of a group of teenagers nominated for an Irish Water Safety Award after they rescued a man from the river Corrib on the night of the annual Macnas parade in October.