More than 6,000 photographs and videos have been included in the collection 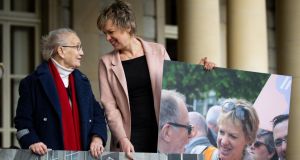 More than 6,000 photographs of the Yes Equality campaign have been added to the National Library of Ireland’s digital archive, almost five years after the referendum that cleared the way for same-sex marriages to take place.

The visual record of the campaign is part of the library’s “Digital Pilots” project, which seeks to expand the way it collects and provides access to stories and enables content like videos and digital documents to be added to its collection.

The pilot scheme aims to ensure that information and memories of Ireland’s modern history are not lost. The archive documents various aspects of the campaign, including personal stories of those involved and their families, images from polling day and the celebrations after the result.

The referendum, held on May 22nd, 2015, saw Ireland become the first country to approve same-sex marriage by popular vote. Some 62 per cent of voters approved the amendment on a turnout of 61 per cent.

The contents of the Yes Equality archive will be available to view in person in the National Library. It will also be made available online, meaning users can view the collection from anywhere in the world.

Speaking at the announcement, Dr Sandra Collins, director of the National Library, said the 2015 referendum was an important part of Ireland’s contemporary history.

“Ireland has undergone huge changes over the last number of years and it’s really important that we add the memory, those milestones, into the national collections,” she said. “We’ll have them safe here, permanently, for everybody to use, research and enjoy for all the decades to come.”

Gráinne Healy, one of the leaders of the Yes Equality campaign, said it was important to ensure people remember when Ireland began to move away from its more conservative origins.

“What happened in 2015, there was great joy and celebration, but time passes on and people actually forget. They forget what it looked like, what was the mood and I think the photographic collection really captures the campaign, that we had such involvement and engagement by all of the citizens around the country,” she said.

Ms Healy added that she hopes the archive will enable future generations to study the referendum and its political consequences.

The Yes Equality campaign is the second digital archive donated to the National Library. Author Marian Keyes provided the first.

In the coming months, there will be a third archive created as part of the digital pilots programme, the details of which have not yet been announced.