Eyewitness footage from around Europe shows pilots struggling to take off and land as Storm Ciara - known as Storm Sabine in Germany - makes its presence felt around Europe. Video: Reuters 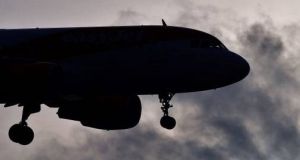 A Dublin to Gatwick flight was unable to land on Sunday due to Storm Ciara and forced to divert to Luxembourg and then Frankfurt Hahn to refuel. Photograph: Getty

Two men ran down the aircraft aisle clutching dripping sick bags as air stewards held out bin bags to receive them. Other passengers were crying as the plane jumped and shook.

Storm Ciara was playing with our plane.

I had been booked on the 8.55am Aer Lingus flight on Sunday, from Dublin to London Gatwick. As I sat at the gate I received a text saying my flight was cancelled, so was delighted when staff moved me onto a 10.50am flight. Others around me faced a wait until 5pm.

That joy soon evaporated. We boarded at 10.30am. The woman beside me was visiting her pregnant daughter and joked they would have to call the baby Ciara.

As the plane wobbled alarmingly in the strong winds on the ground, the captain said we could not leave for an hour.

It looked wild outside, but I saw other planes taking off and was not too worried.

When we finally took off the plane shuddered and shook, sending my adrenaline soaring and prompting expressions of concern among other passengers.

An hour later, when we descended towards Gatwick, the plane jumped and shook.

We swooped down and back up violently while attempting to land four times.

People were shouting and breathing deeply into their sick bags. I gripped the armrests as tightly as I could, terrified. Others were getting sick – or crying.

After repeated attempts to land, lasting around one hour, the plane climbed above the clouds.

The captain said because we were unable to land safely at Gatwick we needed to go to Luxembourg to refuel.

We’d been in the sky for almost three hours.

There was a rush to the toilets despite the seatbelt signs being on, and many people ran up the aisles cupping full sick bags. The air stewards – upbeat, kind and calm – asked passengers to remain seated.

The captain then said Luxembourg airport was full and that we had to fly to Frankfurt.

Everyone laughed initially at the catalogue of mishaps, but the mood quickly changed to concern that we could run out of fuel, especially if there were problems during landing.

Eventually we landed at 3pm in Frankfurt Hahn, and people started phoning relatives to say we had arrived very late, somewhere very far away from Gatwick after a four-hour flight.

Some tried to recount the events of the flights; others sought to downplay what happened.

We remained on the plane.

The stewards tried to serve refreshments, but the aisles were full of restless, hungry people, exhausted from adrenaline and seeking answers.

Some people refused to stay on the plane and insisted on getting off even though they would have to find and fund their way back.

There are no direct Dublin flights from Frankfurt Hahn.

Eventually we were told “the powers that be” wanted the plane back in Dublin, and that Gatwick was accepting very few flights.

Despite the frustration, the camaraderie among passengers was great: one man joked his daughter was delighted she would miss school the next day.

Someone handed out bags from a souvenir multi-pack of Tayto. We giggled from nerves.

At 5.30pm, the captain confirmed we were returning to Dublin and the tirelessly helpful stewards prepared for takeoff for the two-hour flight.

As we descended into Dublin, dipping lower and lower, the plane suddenly whooshed up again and people started laughing and screaming. Were we ever going to be on the ground again?

The captain said it was too windy to land on this approach so we were going to try again.

My neighbours had their head in hands as I reassured them we were wobbling closer and closer to the ground.

Finally we landed, at 8.30pm. The passengers cheered to be back where they started, 11 hours later.