Election 2020 candidate: ‘I definitely think there’s a seat in Mayo for something new’

Harry McGee joins Saoirse McHugh, the Green Party's candidate for Mayo in the 2020 general election, on the campaign trail in Castlebar and Foxford. Video: Bryan O'Brien 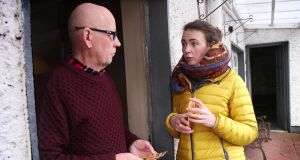 Saoirse McHugh, the Green Party’s candidate for Mayo, chatting to Vincent Barrett while on the campaign trail in Foxford. Photograph: Bryan O’Brien

One day last week Green Party candidate Saoirse McHugh called to a house while canvassing in Mayo and talked to the woman there. It was evening and she getting dinner ready for her family.

“I’d say I was there about 45 minutes. I was just having the craic with her,” she says, happily recalling the encounter. “She literally got a plate out and was taking stuff off all her family’s plates to give me some dinner.”

It was cold and McHugh was starving and had to force herself to decline.

Mc Hugh talks about “having the craic” a lot when she talks about canvassing. She would like to visit every door in the county, but that’s not possible, especially during a three-week campaign in January.

People can’t afford to retrofit in rural Ireland. Public transport does not exist. They need their cars

“I spent way too long at doors and way too long at shops talking to people. You can’t rush people and say ‘vote for me. Bye now’. If you looking for somebody’s vote, you have the courtesy of listening to them.”

In Foxford, McHugh meets a friendly, chatty man who stands solid in the doorway with his arms folded. His name is Vincent Barrett.

“I’m into fishing and shooting. We can’t go out and shoot. They took the fishing licences off us,” he tells her. “Now the guns we have, we are not supposed to shoot, There is lead in the cartridges. I used just go out for a walk and go with the dog and have a shot at a woodcock. I cannot remember the last time I shot a bird. We cannot cut the turf either. That is gone.”

For an urban Green, the smelling salts would be coming out at that stage. McHugh doesn’t blink an eye at the exchange and is full of sympathy. This is country life and she is part of it too.

A rural Green, she sets out her vision for rural Ireland. “I think Mayo can be brilliant. We can have all of the land and all of the fishing. if we owned the windmills we could own all the electricity.

“Mayo needs a 50-year plan,” she says. “Young people are leaving. It does not have to be that way at all. We can bring life back into the towns and villages and stop people driving long distances.”

She also sympathises with beef farmers, who are “having an awful time” of it.

“With climate action they can have a great opportunity. They will never compete in terms of kilos produced. If they help carbon sinks on wet lands or boglands they can get paid for that, or get paid for having wildlife on a farm.”

Twenty minutes of chat later and Barrett is telling her she will get his number one.

Earlier that Sunday morning, McHugh is getting ready at the Mall in Castlebar for the day’s canvass. She cuts a distinctive figure. She is tall, wears no make-up, and her curly hair is tied back in a bun. What marks her out it a bright yellow hooded puffa jacket which has become her uniform during the campaign. Like everything about her, it is dramatic.

When she speaks she mimics other people, and acts out exaggerated responses to what she says. She is unspun and unrehearsed and tells you exactly what she thinks in an unreconstructed Mayo accent.

The transport is her partner Colm Cafferky’s electric Renault which squashes in five people. He is the campaign organiser, and is a quiet, pleasant, laid-back presence all day.

McHugh first burst into the public consciousness during the European elections last year. The Achill Islander effectively put down rival Peter Casey in a debate on Prime Time and briefly looked like she might snatch a seat in Midlands North-West on the back of an opinion poll.

She was young and fresh-faced, fired up with passion and youthful idealism, and was not afraid to share her views (even when they didn’t fully accord with party policy). She immediately became a lodestar for younger Greens.

Then she became the Green Party candidate for Mayo in the general election. A tough ask. The party won just 1 per cent of votes in the local elections here. And it is as rural and traditional as they come.

So it was always going to be a long shot. Her chances of winning a seat also narrowed since the Sinn Féin surge which has put Rose Conway-Walsh right in the frame. But McHugh has made her mark in this campaign, not least by causing a ruckus or two.

For one, she ran a counter-protest in Achill when some locals opposed emergency accommodation for asylum seekers. That was a brave move. She has made “over my dead body” pronouncements about going into government with Fine Gael and Fianna Fáíl and declared herself an anti-capitalist. She supports domestic turf-cutting and small beef farmers.

And most divisively of all, she has opposed carbon taxes. There seem to be Green policies and a separate category of Saoirse McHugh policies. “They all think I’m a People Before Profit mole,” she jokes.

There’s a paradox here. On one hand she diverges from party policy because she is more radical. But on the other, she is far more conservative about climate action in some areas, especially on rural Ireland.

She sets out her case for her own people: “It feels that everyone in Achill commutes to either Westport or Castlebar. That’s 60 kilometres each way.

“A price on carbon has to serve a purpose. Unless there is an alternative, it will disproportionately affect the communities I know. And make things worse for them.

“People can’t afford to retrofit in rural Ireland. Public transport does not exist. They need their cars. Carbon tax has to be done in a way that approves quality of life.

“Myself and my partner live across the road from my mum and dad. We have to have four cars.

“A lot of that in rural Ireland is because villages and towns are shutting down and there is no plan to keep them alive because 10 years ago I could walk to a shop and post office and now I have to drive.”

On turf-cutting she says: “You can’t tell people you have to stop extracting peat to heat your homes unless an alternative is found.”

So has she got flak from the party for the divergent line? “Not so much blowback. I think some people probably watch me on media like this and say [hands covering her face] ‘Oh God, oh No, who’s your woman?’

“People in the Greens are quite like, ’That’s just Saoirse, it’s fine’, I think.”

So why strike the Saoirse line?

“I am a terrible liar,” she says. “The Greens are open to speaking their minds. I have prepped for interviews before and I get to what should be my line and it just does not come out and I say the wrong thing, which is the true thing.”

But the radical stuff is there too. She says it’s better for a party like hers to stay true to it, rather than dilute the message. So for her, the Greens accommodate not divided views, but a spectrum.

She has a slightly more nuanced view on Fine Gael and Fianna Fáil these days. “I meant extrapolating out from the last 100 years of their policy, I would not go into coalition with them.”

But, she says she would consider it if they came in sackcloth and ashes over their wasteful and neoliberal ways, and laid out a wonderful plan.

Does she have a chance? “Some minutes I think I will top the poll. Next I think I will get 10 votes,” she says. “I definitely think there’s a seat in Mayo for something new.”